This is a part of our Cambodia forums to chat about anything Cambodia-related. This discussion forum is at the top of our site because it's usually the busiest part of the expat community chatter with random topics on just about everything, including expat life, Khmer politics, Cambodian blogs we have or have come across, or whatever else our members want to discuss. Whether you're an expatriate, tourist, Cambodian or random traveler just passing through South East Asia, you are welcome to talk about anything or start new topics yourselves.
Post Reply Previous topicNext topic
73 posts

Any bets on how long they will last? Chinese like monkey brains and any free meat in PP is fair game
Top

Like most wild animals, they become strange when living in an urban environment.

Gibbons in the jungle are shy animals from what I've heard. These ones must be freaking out. Horrible to think of them swinging on all those electricity wires in PP.
Top

xandreu wrote: ↑Sun Feb 24, 2019 12:52 am So I was stood on my balcony a couple days ago having a quiet cigarette, as you do, and I became aware of an animal noise, slowly increasing in volume, but eventually becoming overpowering in volume to the point where I released this was not a normal sound from a normal animal that I'd heard before. It's difficult to replicate in text so I won't bother, but I recognised it instantly as being from a primate of some kind.

Low and behold, I scoured my surroundings and saw, what I first evaluated as being a monkey, sitting on a bunch of the elevated wires which adorn the streets of Phnom Penh. I called to my partner, who was sleeping at the time, and said to come and look. It was quite a powerful looking beast which, by the time my partner had got up and come out, had started to swing its way further down the road, using the wires as if they were the tree branches of it's natural habitat.

We both looked on from our sixth floor vantage, watching it swing it's way up to the end of the road, and wondered what we should do. My partner, who's Khmer, mentioned that there was some sort of institution in place that we could call, but the monkey (which, by now I'd reconised as a Gibbon) was moving so fast, it seemed pointless to call anyone. As the Gibbon was so high up in the wires, nobody else seemed to be noticing it. The road beneath, the moto's, pedestrians etc, seemed entirely oblivious to the fact that a rather large and dare I say, slightly dangerous looking primate was swinging it's way up the road above them.

It eventually got to the end of the road and swung it's way across to another street. Myself and my partner took the easy way out and convinced ourselves that it was now somebody else's problem and that someone else would surely call someone and do something about it. As you do.

So this morning, I leave my apartment to go to work, and while I'm getting my bike out, ready to go to work, I hear the same primate call that I'd heard just yesterday. I went outside, and there's three of the little buggers, swinging their way down the road towards my apartment. These were about half the size of the one I saw yesterday, and looked relatively harmless (I guess, not being a gibbon expert etc) This time, other people had noticed, and were taking pictures and videos on their phones. I had my phone with me, so I was able to film them too. I went to work and showed my video to some Khmer work colleagues who all seemed astounded that wild gibbons were roaming around the streets of PP.

When I got home, I showed the video to my landlord who seemed much less impressed than anyone else. He seemed to know all about them. Apparently, there is some sort of sanctuary near where I live, where the gibbons live, and they're let out during the day for exercise, but they know to go home at the end of the day? I asked my partner to ask him about the dangers involved - both to them attacking people (the one I saw yesterday I would not want to meet down a dark alley late at night) and also to them electrocuting themselves if they touch the wrong bit of the wrong wire while they're swinging along them. I didn't need to understand Khmer to understand what the shrugging of shoulders meant.

I've lived where I live for almost a year now, and I've not seen this before. Whatever's going on is something new around here, as I'm sure would be anywhere in PP.

Does anyone have any info on these gibbons? Anyone else seen them?

What area of PP are you in?
My mate had one on his balcony recently and it stole a shoe (or something trivial). I came in the apartment apparently. He's just off St 172.
Top

They are Pileated Gibbons I believe, I've seen them on Mao Tse Tung near the turn off at 183. 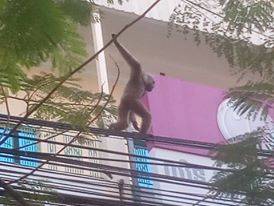 They belong to an Okhna who lives nearby, he lets them wander around the neighborhood.
Silence, exile, and cunning.
Top 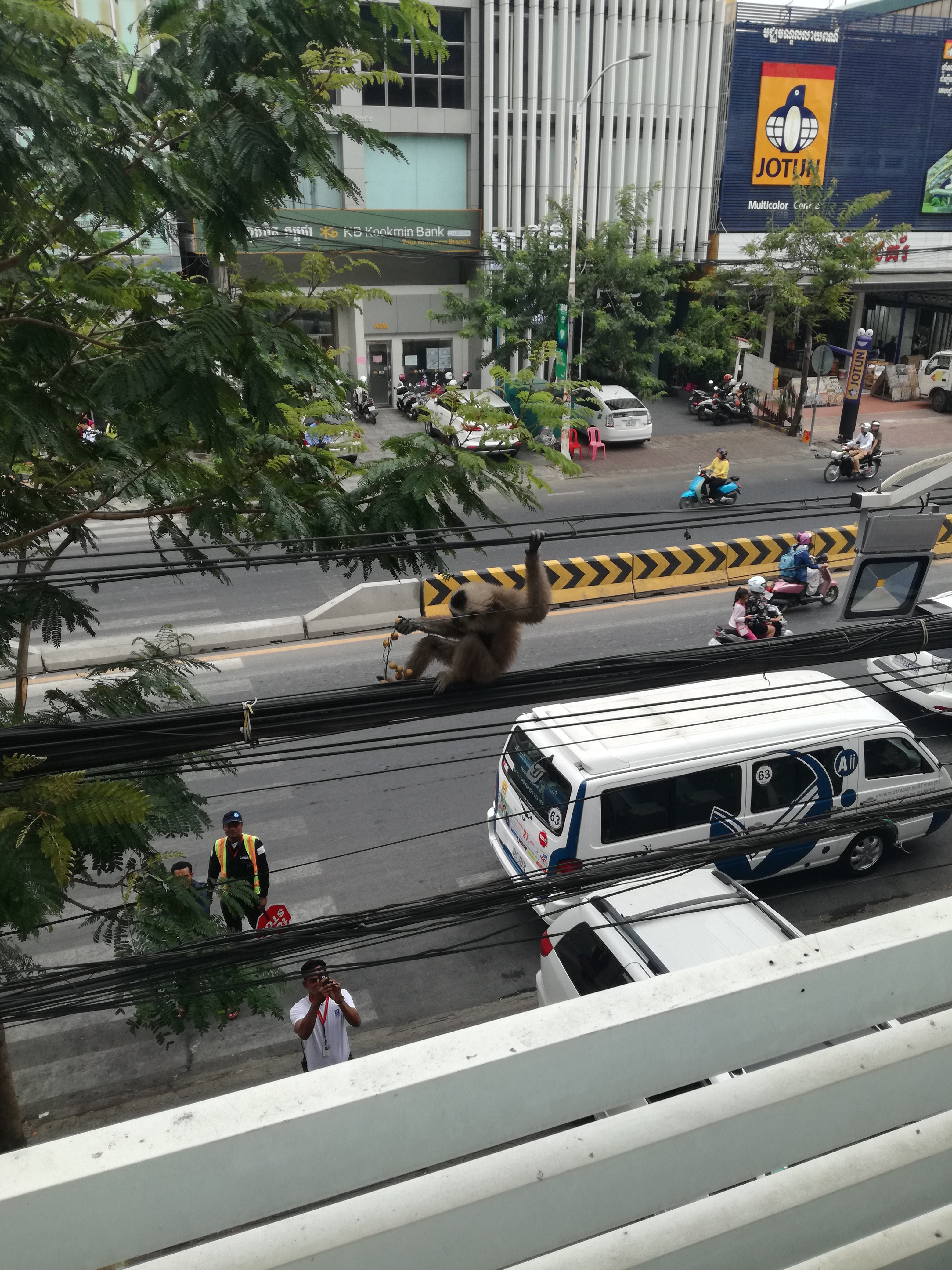 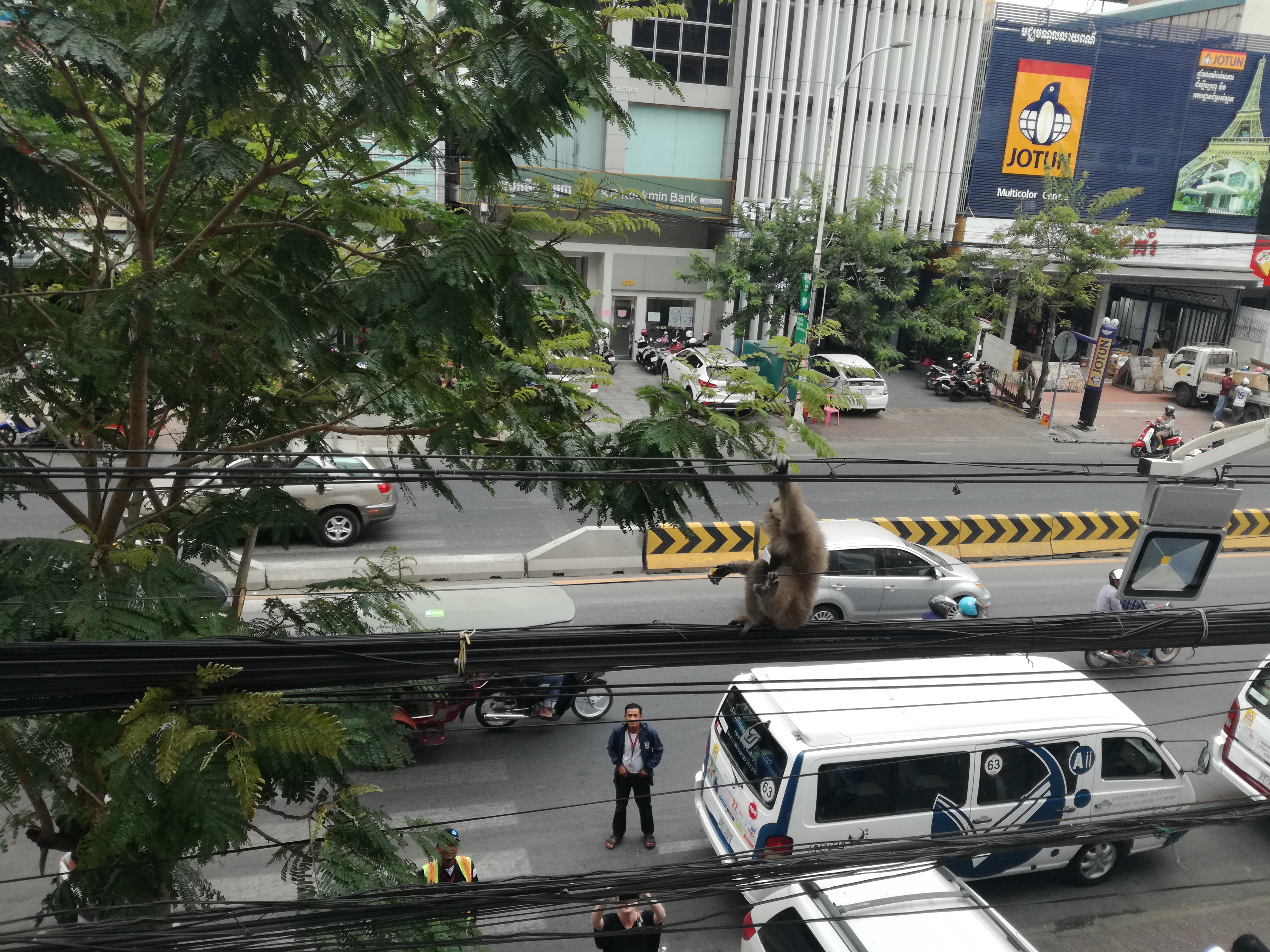 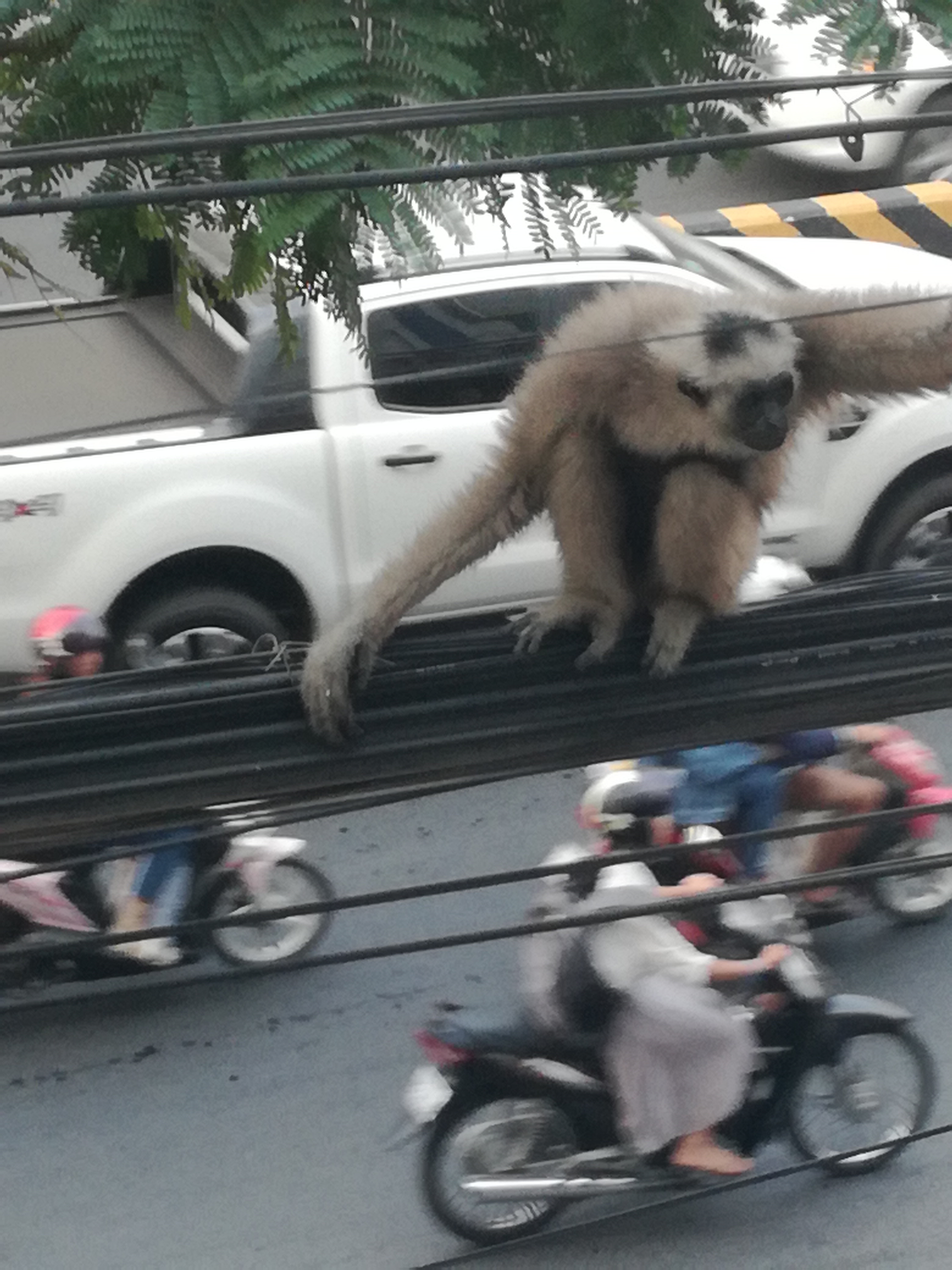 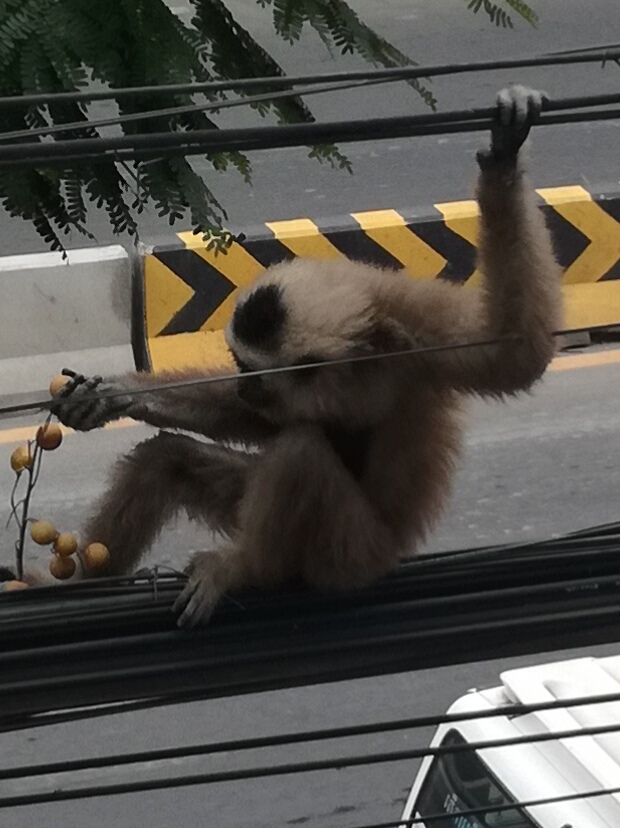 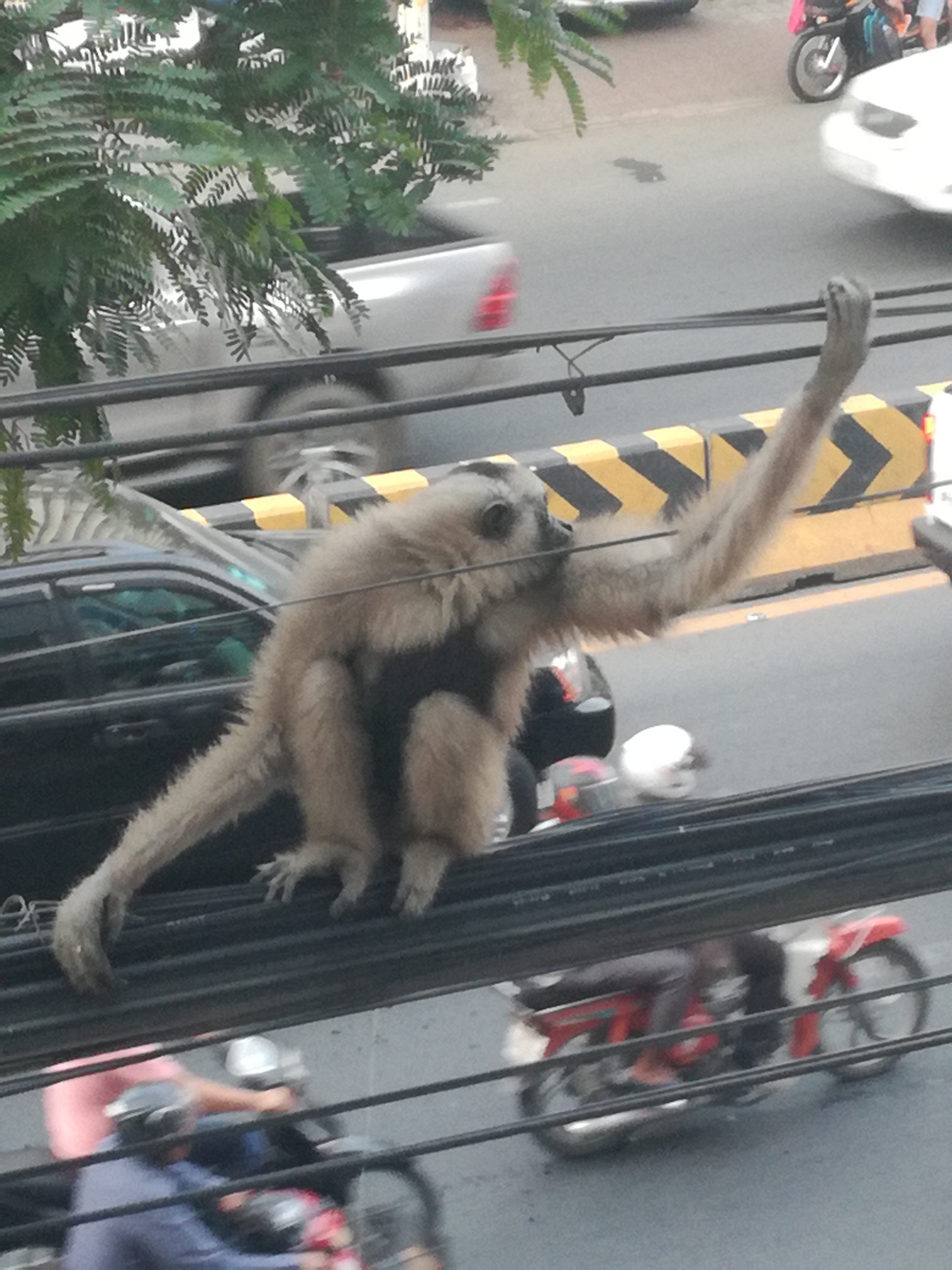 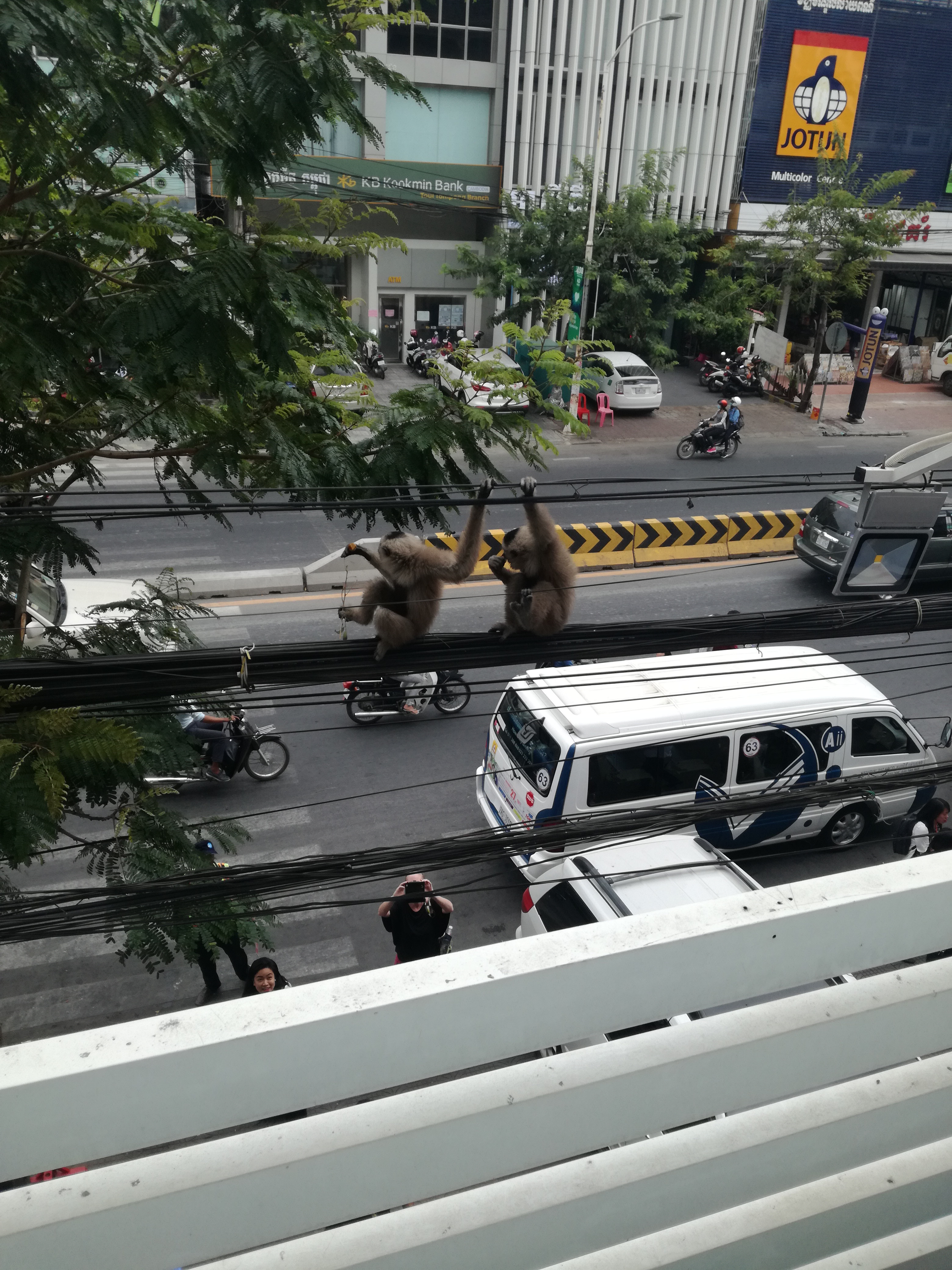 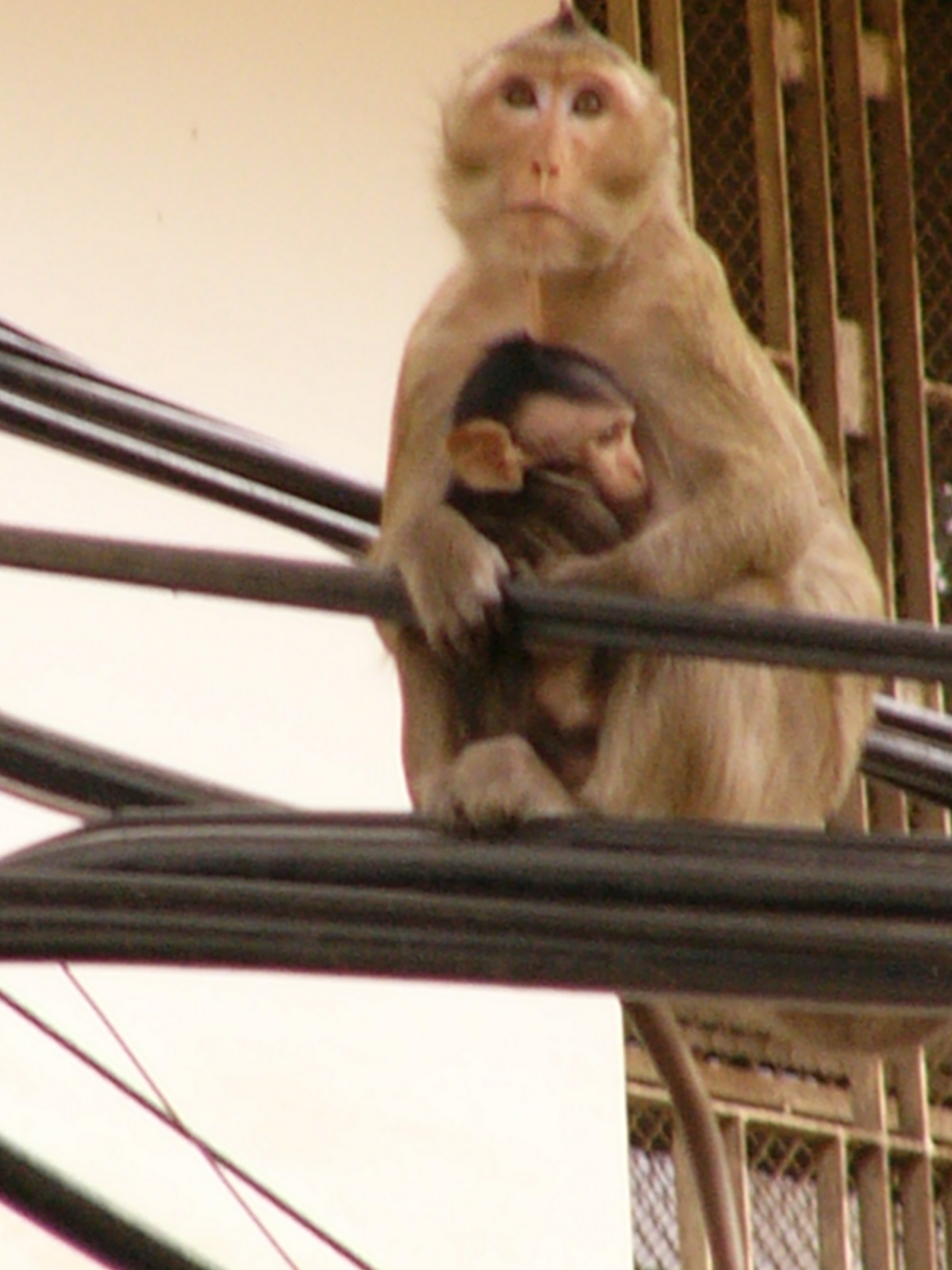 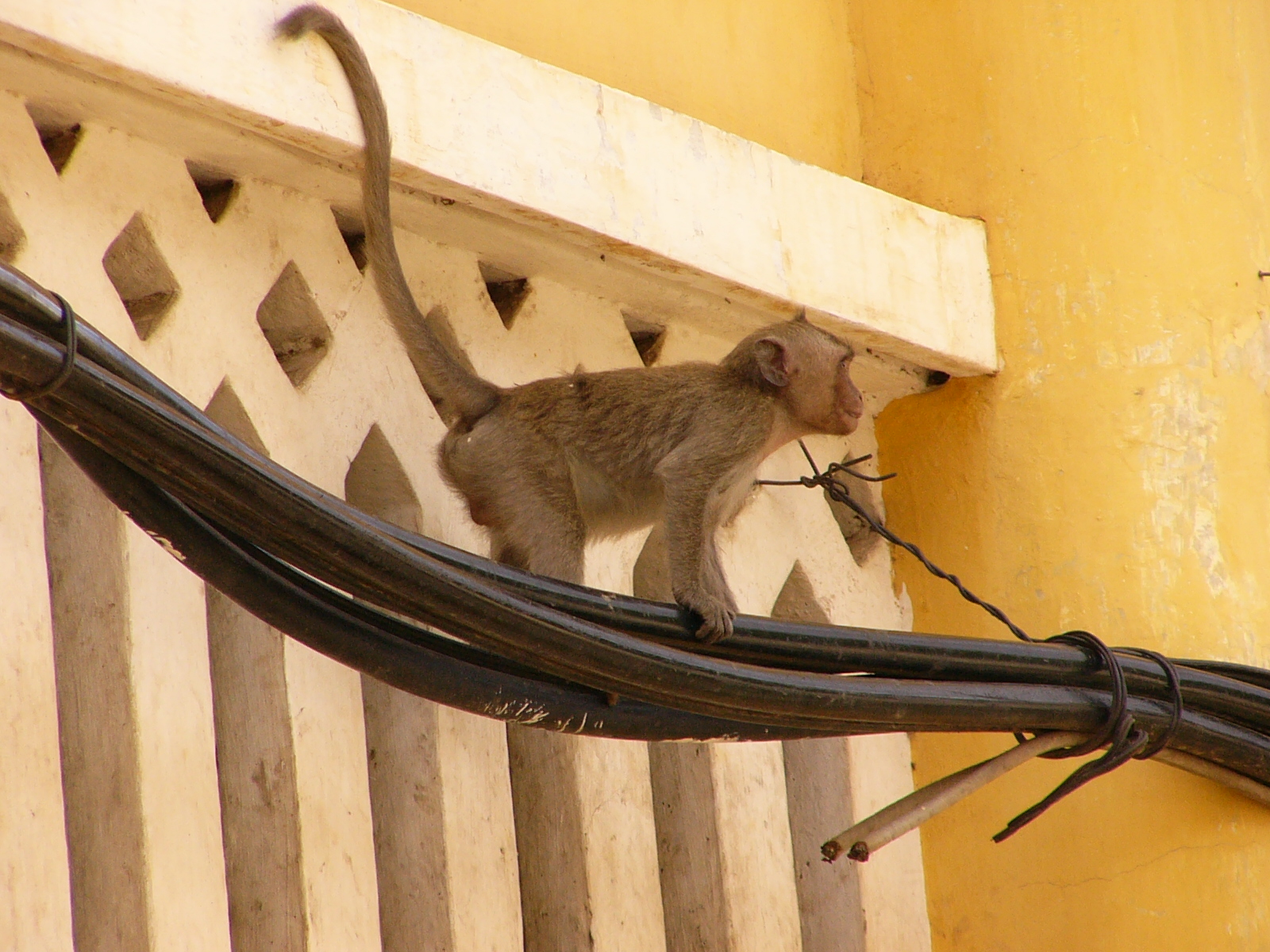