Echoing what others have said, a friend of mine who lived here from 1995 till this year and is a good bit older than me had cataract/ replacement lens surgery a few years ago his doctor told him to wear decent shades here with good protection. The sun rays are very direct here and only go through a relatively thin amount of atmosphere. I had worn pretty fancy shades for years but when they were all lost/ broken just wore crap ones for a while. It's only $50 or so for some with good UVA protection. If you take care of them they can last years.
Silence, exile, and cunning.
Top 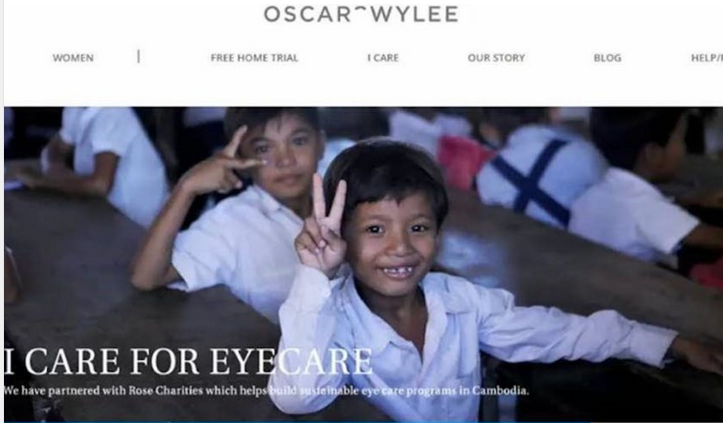 An eyewear company has been fined $3.5 million by an Australian court after falsely suggesting it was donating glasses to Cambodians “in need” for every pair it sold, according to Australia’s competition and consumer commission.

Oscar Wylee’s marketing videos showed scenes of poverty in Cambodia and included slogans such as “For every pair purchased, a pair is donated to someone in need,” the commission said in a statement.

The company claimed to have partnered with international anti-poverty network Rose Charities and used images of the Rose Eye Clinic in Phnom Penh, the statement said.

In total, it donated 3,181 frames to charity, or about one set of frames for every 100 pairs of glasses sold, it said.

“Oscar Wylee has taken advantage of the charitable nature and goodwill of consumers and its behaviour risks diminishing consumer confidence to support other businesses that genuinely engage in philanthropic activities,” said the commission’s deputy chair, Delia Rickard, in the statement.

Hang Vra, director of Rose Eye Clinic, told VOD on Monday that the clinic never received any money from the deal, and the single shipment from Oscar Wylee was of “very, very old frames — no glass.”

“We didn’t use them because they were old,” Vra said of the 100 frames. “It was only one time. After that, we never had contact.”

Vra added that the clinic had become a private business at the end of 2018. Rose Charities Canada had previously provided a monthly stipend, while Rose Charities New Zealand had donated second-hand equipment, he said.

In a statement to news.com.au, Oscar Wylee said it “acknowledges the importance of the issues raised” and “sincerely regrets the contraventions” of Australian consumer law.

“Oscar Wylee has taken corrective action in response to the court action and in line with our ongoing commitment to corporate social responsibility,” it said.

Rose Charities New Zealand chairperson Trish Gribben told VOD that the group had “no idea why Oscar Wylee failed to deliver on their advertised promise to donate glasses to Cambodia.”

“We have never had any close contact with the company,” Gribben said. She added that Rose Eye Clinic no longer needed support from Rose Charities. “The clinic is self-sufficient — an outstanding success story.”

Rose Charities International has organizations in eight countries and programs operating in 18, according to its website. Rose Eye Clinic treats about 50 patients a day and performs much-needed cataract surgery, another Rose Charities site says.
https://vodenglish.news/eyewear-firm-hi ... ty-claims/
Cambodia Expats Online: Bringing you breaking news from Cambodia before you read it anywhere else!

clutchcargo wrote: ↑Sat Dec 14, 2019 10:18 pm If the accusations are found to be true, I hope the full force of the law will brought against this company for misleading customers to think their purchases were also providing donations to the poor. Tantamount to fraud..

The full force of Australian law...

Royal Commission finds various multi billion dollar frauds by all Aussie banks.
Spoiler:
not one executive has been or ever will be prosecuted
Royal Commission found many top leaders of the Catholic church covered up, protected, and moved around to another schools, hundreds of known pedo priests.
Spoiler:
not one has been or ever will be prosecuted for these cover ups
Royal Commission into Lawyer X scandal - the mind boggling use of Victorian police to use a top gangland lawyer as an informant. Top cops, Commissioner of Police down committed "the most egregious acts against the justice system ever purpetuated in Oz". Hundreds of murder and highest level drug convictions now likely to thrown out.
Spoiler:
experts say unlikely one cop will end up be charged
Special Commission of Inquiry into serious war crimes committed by special forces in Afghanistan finds evidence that will "disturb, even horrify Australians" (<defence minister, preparing Oz for imminent release of findings)
Spoiler:
experts say "further investigations", political considerations, and legal processes will mean nobody will be face court for at least 10 years - if ever
These sunglass fraudsters better hope they are "too big to fail"
or else, of course they will go to jail just like all common criminals deserve.
Top

The Federal Court has ordered the optometry retailer to pay $3.5 million in penalties after it was revealed it had lied about its charity campaign “buy a pair, give a pair”, where one pair of glasses was purported to be donated to charity for every purchase in store.

From 2014 to 2018, the company claimed it was providing eyewear through charities to disadvantaged people in Australia and overseas.

In the five years of the campaign, only 3181 frames were donated to charity, despite the company selling 328,010 pairs of glasses during the period. It was also revealed the glasses did not contain lenses.

Oscar Wylee was found guilty of deceptive conduct and making misleading claims about its charitable donations, which is in breach of Australian consumer law.

“Oscar Wylee deprived disadvantaged people in need of the benefits it promised in its advertising,” she said.

“Oscar Wylee promoted its charitable activities as a core reason why consumers should buy Oscar Wylee glasses, but its claims were false and were made in circumstances where consumers could not easily verify these claims for themselves.”
https://www.news.com.au/finance/busines ... 5492d4f9ad
Cambodia Expats Online: Bringing you breaking news from Cambodia before you read it anywhere else!