This is a part of our Cambodia forums to chat about anything Cambodia-related. This discussion forum is at the top of our site because it's usually the busiest part of the expat community chatter with random topics on just about everything, including expat life, Khmer politics, Cambodian blogs we have or have come across, or whatever else our members want to discuss. Whether you're an expatriate, tourist, Cambodian or random traveler just passing through South East Asia, you are welcome to talk about anything or start new topics yourselves.
Post Reply Previous topicNext topic
11 posts

.. some countries in the region are amongst the world’s poorest performers, including Afghanistan (16), North Korea (17) and Cambodia (20)

On January 23, 2020, Transparency International (“TI”) published its annual Corruption Perceptions Index (“CPI”) for 2019. As with previous years’ indexes, the CPI 2019 demonstrates that many regions, including Asia-Pacific, have not made meaningful strides in the fight against corruption for some time.

The region contains some of the strongest performers in the world, with countries like New Zealand (87), Singapore (85), Australia (77), Hong Kong (76), and Japan (73) all featuring in the global top 20 countries and territories. On the other end of the spectrum, however, some countries in the region are amongst the world’s poorest performers, including Afghanistan (16), North Korea (17) and Cambodia (20).

ful.https://www.lexology.com/library/detail ... 09cdfc9494
The idea that seeing the world is going from place to place to look at obvious things is an illusion natural to dull minds.
Top

I like this way of counting corruption.
Cambodia is right up there in the top 20. Very impressive.
Normally when talking about this sort of thing, almost everything actually, we are talking lowly numbers like 160th out of 180.
Top

Countries like the US, where rather than secretly taking money from corporations, the government just lets them write the laws, manage to weasel a good score? I call BS on TI.

Good to know Cambodia is a top performer. You certainly can't tell by the fact that the PM chose to make sure his pockets stay full and continue every flight from China rather than try to protect the country from a deadly virus...
Do you think the parents of baby boomers whined so much when the boomers started changing society? And yet the whiney ones like to call young people "snowflakes." Hmm...
Top

He went to China to show his support and was apparently keen on visiting Wuhan.

Funny old world. pretty much the first thing Boris johnson did as prime minister was to accept a free holiday from a german businessman ina 20,000 gbp a week chalet on a private island in the caribbean. On the way he dropped off all the bribes and forex trading profits from brexit in an offshore bank, straight fromhis dilomatic bag. Did anyone say anything ? Nope. Welcome to the banana Republicc of britain
Top

There’s no corruption in Cambodia, glorious leader said so.
Cambodia: where money can buy you absolutely anything except intelligence.
Top

Gov’t shrugs off corruption report
Long Kimmarita | Publication date 28 January 2021 | 21:47 ICT
Transparency International (TI) has ranked Cambodia as having the lowest score in the ASEAN region, corresponding to the highest level of corruption. Government officials dismissed the rating as not reflective of the reality in the country.

On January 28, the TI Secretariat in Berlin, Germany, released the results of the 2020 Corruption Perceptions Index (CPI). Cambodia scored 21 out of 100 – an improvement of one point over 2019, ranking 160th among 180 countries and territories.

“From a regional perspective, Cambodia continues to occupy the third lowest spot in the Asia Pacific, coming above only Afghanistan and North Korea, and the lowest spot in the ASEAN region. The results obtained by other ASEAN countries have been mixed,” TI confirmed.

According to TI’s findings, Singapore continued to be ranked among the top 10 least corrupt countries in the world, repeating its score of 85 and tying for third place with Sweden and Switzerland.

Several countries in the region saw their scores decline from the previous year: Myanmar (down from 29 to 28), Vietnam (37 to 36), Malaysia (53 to 51) and Indonesia (40 to 37). Thailand, Laos, Brunei and the Philippines maintained their scores.
https://www.phnompenhpost.com/national/ ... ion-report
Cambodia Expats Online: Bringing you breaking news from Cambodia before you read it anywhere else! 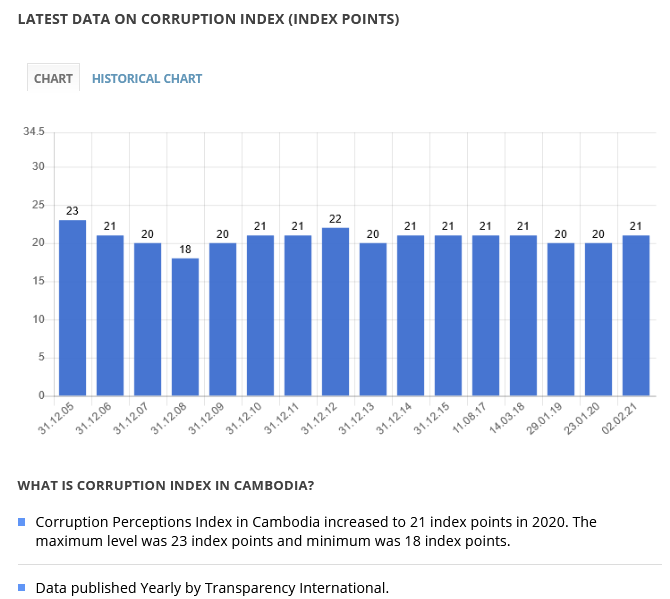 https://take-profit.org/en/statistics/c ... /cambodia/
Cambodia Expats Online: Bringing you breaking news from Cambodia before you read it anywhere else!

cpi is a little skewed towards everyday business
do you have to pay a bribe to get permit, etc

the big money is usually behind the curtain
if that were measured, usa and europe would perhaps not fare quite so well
but cambodia would be up with somalia etc as a bona-fide mafia state
.