Confessions of an Opium-Seeker (Great Read!)

Confessions of an Opium-Seeker (Great Read!)

I was going to place this with the other opium piece posted today but it's far too good to languish under the title of another. 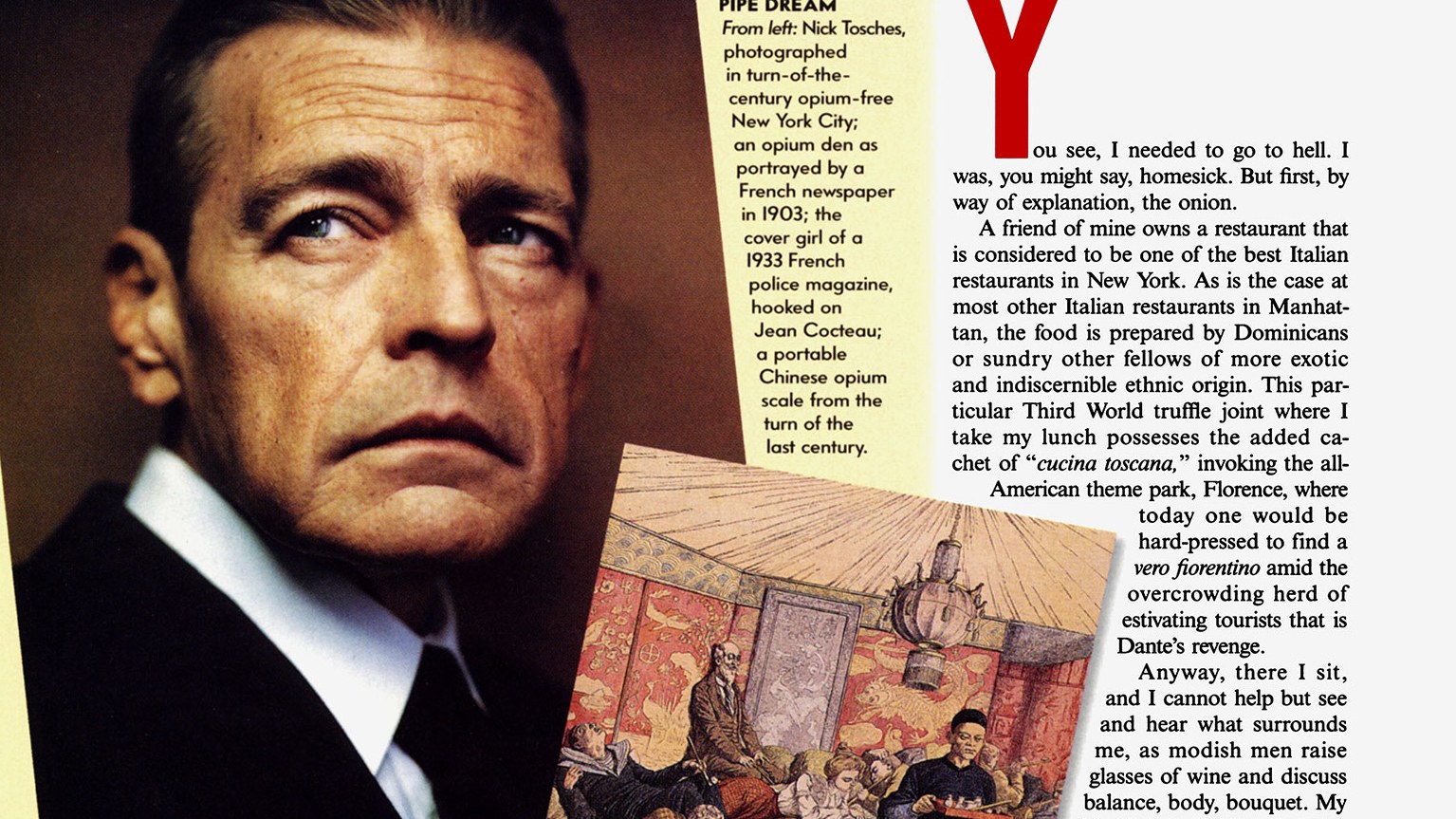 Why opium? Thomas De Quincey’s description of it as “the celestial drug” is not far from perfect: “Here,” said he, “was a panacea, a φάρμ˘ακον νηπενθές, for all human woes; here was the secret of happiness about which the philosophers had disputed for so many ages, at once discovered.” This celestial drug, this panacea, “communicates serenity and equipoise to all the faculties, active or passive,” and “introduces amongst them the most exquisite order, legislation, and harmony.” No one, “having once tasted the divine luxuries of opium, will afterwards descend to the gross and mortal enjoyments of alcohol.”

You see, I needed to go to hell. I was, you might say, homesick. But first, by way of explanation, the onion.

Ours, increasingly, is the age of pseudo-connoisseurship, the means by which we seek fatuously to distinguish ourselves from the main of mediocrity. To sit around a bottle of rancid grape juice, speaking of delicate hints of black currant, oaken smoke, truffle, or whatever other dainty nonsense with which nature is fancied to have enlaced its taste, is to be a cafone of the first order

I walk into a joint on Patpong Road in Bangkok, sit down on a banquette near the bar, and within a minute there is one naked scrawny girl to my left, another to my right, a third crouched between my legs beneath the little table set before me. The brace that flanks me have squirmed and curled their way under my arms, drawn each of my hands to a breast; the one under the table strokes my crotch and thighs with her fingers and head

“They like Americans,” says an expatriate friend who has long been involved with one of the loveliest of the countless girls who work the joints of Patpong Road and the Nana district. “The British are cheap, the Japanese want to put out cigarettes on them, and the Germans are, well, German.”

In the morning, I meet with an older friend of my friend. He remembers the opium-den days of Bangkok, and he knows Chinatown well. He takes me to an ancient “teahouse” of many stories on Yaowarat Road in Chinatown. At the second landing, he exchanges words with a group of ominous-looking men gathered round a circular table. One of them nods, and we proceed through a curtain into a narrow hall that becomes a maze of narrow halls, lined with small rooms. An old woman takes us to one of the rooms, brings us two small, dirty teacups and a pot of hot tea. A teenage girl enters, then another. These girls bear numbers, pinned to their open shirts.

Phnom Penh. I’ve been practicing my Cambodian for days, a vocabulary of one word whose proper pronunciation lies vaguely between a pian and a phian. Not far from the hotel where I’m staying, there’s a small, enclosed plaza that is notorious for its murder rate: a killing or so every week. At one corner of the plaza is a very big barroom, made all the bigger by the absence of a wall and part of the roof, which appear to have been lost to an explosion some years ago, thus opening the place to the limitless black Cambodian night.

The bar, its entrance guarded by a machine-gun-bearing sentry, is loud with harsh Asian rock ‘n’ roll and screaming of all sorts. Outside, a bit beyond where the missing wall used to be, is a gigantic screen on which is projected a Malaysian monster movie with Cambodian subtitles, and the soundtrack screams that accompany every drive-in-size out-of-focus bloodletting occasionally drown out the screams of the place.

Done with his ganja, he turns his attention to a chipped and cracked lacquer box, from which he takes a large soft black square that is wrapped in cellophane imprinted with little yellow pagodas. He unwraps the opium, places it on a lacquer tray that holds two small, sharp knives, a pair of thin-bladed scissors, a box of matches, a spindle fashioned from a bicycle spoke, a short rectangular strip of stiff dry frond, and an unlighted coconut-oil lamp whose glass chimney has been crafted by expertly cutting the bottom from a jelly-jar glass.

Besides contamination by the blending in of the toxic pipe-head scrapings, raw opium is subject to the addition of all sorts of noxious substances to increase its weight for sale, from gum arabic to molasses to tree mastics. The first step in the purification process is to submerge a loaf of raw opium, usually a brick of from one to two kilograms, overnight in a large pot of clear springwater. The next day, the pot should be brought to a full boil and whisked thoroughly for 15 minutes to completely dissolve the raw opium.

full long read https://www.vanityfair.com/news/2000/09 ... ens-200009
The idea that seeing the world is going from place to place to look at obvious things is an illusion natural to dull minds.
Top

Re: Confessions of an Opium-Seeker (Great Read!)

Whatever, perhaps back then it was the magnificent ceremony for those times, but today I worder If exotic strainso of Cannabis would not only be more suitable but also useful
Top
Post Reply Previous topicNext topic
2 posts • Page 1 of 1