The expectation that women are made for kitchens and kids is still prevalent here, with oppressive societal values still held widely around the Kingdom, but urban areas are showing greater signs of progress.

The ILO found that 91.3 percent of unpaid care responsibilities was carried out by women. The usual tropes of female subservience – cooking, cleaning, childcare – eat up 188 minutes of a woman’s day in Cambodia, compared with just 18 minutes of a man’s.

Written in the 19th Century by King Ang Doung, Chbab Srey takes the form of a poem that instructs women on how to be pure and live up to archaic cultural ideals – it is a warped notion of purity that has left so many Khmer women behind, marring Cambodia’s economic development in the process.

Despite having seen an enormous amount of change since first arriving in Cambodia in 1996, where Joukes recalls almost anyone with any level of education was a man, she says there’s still much to be done and cites a 2013 UN survey that found 95 percent of Cambodians still believed a woman must obey her husband.

The World Economic Forum’s figures back this up. Where 1 is perfect equality and 0 is total imbalance, the level of gender equality among professional and technical workers in 2017 was recorded at 0.573 which then shot up to 0.746 in 2018.

The playing field is not yet level, with the ILO estimating a 20 percent net wage gap between men and women in Cambodia. This, coupled with their concern over the 57 percent of women who are in what the ILO calls “vulnerable employment” highlights the need for a business case to be made for women-focused policies.

In 2018, the McKinsey Global Institute highlighted the value of gender equality in economic terms, with Asia and the Pacific being able to add $4.5 trillion to annual gross domestic product (GDP) by 2025, or 12 percent above business as usual, should it implement gender equality policies effectively. Cambodia, the study found, stands to gain $4 billion by 2025 if it follows suit.

Presumably Gerald Flynn is a feminist.

All of the above is why Khmer women make great wives.

Why is being a mother frowned upon exactly? Why is it no longer desirable to stay at home and take care of the home, your children and a husband?
No wonder the birth rate in the west has plummeted with attitudes like this... tho to be honest ..yeah money played a big part. But in the UK this really got faked up when they started allowing both partners wages to be used for a mortgage.
Top

The day my other half can secure a decent four to five figure months wage is the day I'll become a stay at home dad and do all that shit for her.

That said, current employer has a good m/f ratio in our workplace with many of the women doing jobs that may be traditionally be considered as "male" roles.
Top

These women were on their way to fantastic new jobs to raise the index placing, but they all got stopped by police for not wearing helmets and thus were not included in the survey, dropping Cambodia three places in the rankings.
Meum est propositum in taberna mori,
ut sint Guinness proxima morientis ori.
tunc cantabunt letius angelorum chori:
"Sit Deus propitius huic potatori."
Top

This ^^ could not possibly be true.
Men are not 95% of the population,
- and the other half certainly don't believe it.

Western colonial feminist propaganda trope.
===============
We are all puppets in the hands of an insane puppeteer...
--Brother Theodore
Top 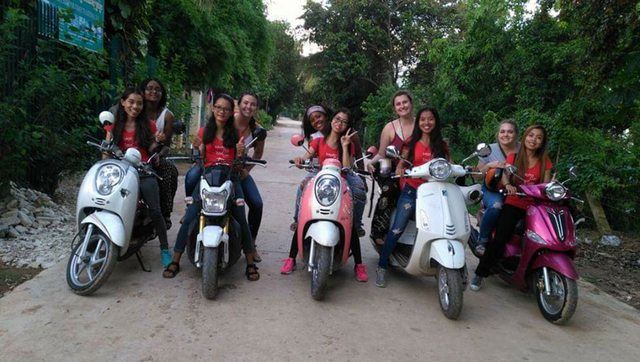 Aren't these the ladies who started up a Woman's Motodop Tour Service in PP ? Any news of them ? Is their business still going ?I can't remember what their name was.
Top

Initially, right from the early 1990's there seemed to be a really firm commitment to actively include women in the mid-high levels of the public service and government here.
That still seemed to hold throughout the 2000's, somewhat - but nowhere near as evident today.
???
Top

Kung-fu Hillbilly wrote: ↑Mon Nov 04, 2019 3:49 pm Despite having seen an enormous amount of change since first arriving in Cambodia in 1996, where Joukes recalls almost anyone with any level of education was a man, she says there’s still much to be done and cites a 2013 UN survey that found 95 percent of Cambodians still believed a woman must obey her husband.

Whatever the respondents say about traditional beliefs - anyone who thinks Cambodian women are meek things who always obey their husbands is very uninformed, or has spent too much time in the boonies.