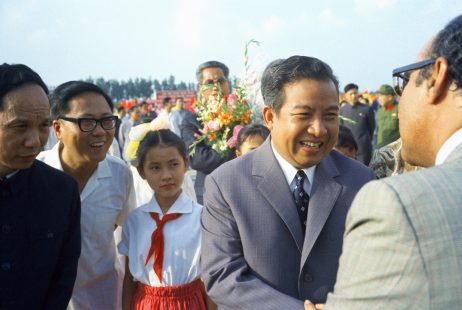 Overdependence on China undermines Cambodia’s national security. We know because it’s happened before.

In May 1965, then-Prince Norodom Sihanouk of Cambodia terminated diplomatic relations with the United States. In so doing, he altered his strict adherence of neutrality in foreign policy to align with the People’s Republic of China (PRC).

Sihanouk was in part acting in response to a derogatory article by Bernard Krisher for Newsweek that accused his mother, Queen Sisowath Kossamak, of running a bordello, along with an air raid by an American plane on a village in Kampong Cham province, which killed one teenage boy and injured a few others. ....

Sihanouk’s decision to opt for close alignment with China had a number of implications for Cambodia’s national security. Internally, suspension of American aid in 1963 stirred contention among the rank and file of the Cambodian armed forces close to General Lon Nol and the commercial elites, both of whom had fed on U.S. largess and economic benefits since 1955.

The last straw came when Chinese Premier Zhou Enlai, who was a target of the Red Guards at this point, openly asked Cambodia to allow the ethnic Chinese community to pledge their allegiance to Communism and Chairman Mao, a move that broke with Beijing’s long-held tradition of Pancha Shila. These developments greatly unnerved Sihanouk, who had previously expected that China would stand behind him through thick and thin without trying to impose its ideology on Cambodia.

Eventually, the Lon Nol-Sarik Matak-Cheng Heng clique orchestrated a coup through a vote in the National Assembly and ousted the Prince while he was overseas on March 18, 1970. This event unfolded almost exactly one year from when the first American bomb fell on Cambodia during the Breakfast sorties. The coup effectively ended Cambodia’s centuries-old monarchy and pushed the small country into the all-engulfing war in Vietnam.

There are two lessons we can learn from this very brief dose of history. One, as a small state Cambodia should never be dependent on a foreign patron, because doing so will expose it to the risk of being subjected to the powerful will of its bigger, more powerful peer.

To protect its economic interests, China orchestrated a cyberespionage campaign through a group of state-linked hackers that targeted local politicians, diplomats, human rights activists, and public institutions to try to interfere in Cambodia’s 2018 general elections. This is a serious abuse of trust between friends.

These are some examples of the costs Cambodia has to pay for its increasing dependence on China. Compared to 1965, when the Cambodian leader cut off ties with the West to align with the PRC only to find himself thrown under the bus by Beijing later on, today’s situation is less dangerous than that of the Cold War — but it bears stark similarities that deserve immediate attention.

full https://thediplomat.com/2019/12/cambodi ... ry-lesson/
The idea that seeing the world is going from place to place to look at obvious things is an illusion natural to dull minds.
Top

Re: Cambodia’s Disastrous Dependence on China: A History Lesson

History doesn't repeat itself but it often rhymes, right?
Top

Re: Cambodia’s Disastrous Dependence on China: A History Lesson

Chansambath Bong is a former Fulbright scholar with an MA in Security Studies from Kansas.
Well "groomed" you might say.
Some valid points but it comes from a competing agenda for sure. Keep that in mind when reading.
To me that sticks out like dogs ears .
Top
Post Reply Previous topicNext topic
3 posts • Page 1 of 1