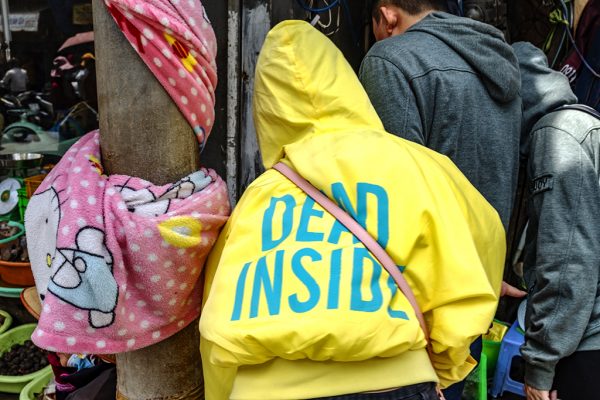 Squatting on the ground and picking my teeth, the few that are left, that is, with none shiny black, unfortunately, I most emphatically declare, “Fuck English!”

With exceptions, and I’m being very measured here, your heritage must be protected and endlessly studied, for its wealth can’t be adequately assayed even after several lifetimes. Walk backward. Look back!

Haircuts are cooler. Tattoos spider. Urban sophisticates browse foreign cuisines, jet overseas and are mesmerized by American films, so their demeanors and postures, too, have evolved, or been tinkered with, I should say

You don’t even have to be of a different color. Last year in Phnom Penh, I met by chance a Vietnamese, Ni, who had arrived in Cambodia in 1991 with just $15, which dwindled to $2 in two weeks. Unable to find work, Ni figured he’d have one last meal, then run in front of a bus, but as he debated this solution, a Toyota Camry actually knocked him down.

Yet, some tough guy has thundered, “And I will destroy your high places, and cut down your images, and cast your carcasses upon the carcasses of your idols, and my soul shall abhor you.” Verily, I say unto you, Communism and Christianity are squirted from the same urinary meatus. Please don’t save me!

Fuck, too, Evelyn Waugh, Norman Lewis, Paul Bowles, Paul Theroux and all the rest, for they have polluted my beautiful, radiant mind of color with the slave masters’ suffocating lingo. With each sentence, I’m being drawn and quartered by all of Western civilization.

There is an atavistic fear of being a misfit in a crowd, of being eyeballed, fingered, targeted or swarmed, and this terror is amplified if you have no words to fend off, explain, ingratiate or even grovel with. Speechless and diversely striped, you’re indeed a helpless animal.

When Vietnam invaded Cambodia on Christmas Day of 1978, it took them just two weeks to reach Phnom Penh, and there, they set up a puppet government. With a client army built from scratch, they inserted Vietnamese officers. Some of these adopted Cambodian names and stayed behind even after the Vietnamese withdrawal in 1988. History is filled with obscured facts and secrets.

full http://www.unz.com/ldinh/belonging-not- ... who-cares/
The idea that seeing the world is going from place to place to look at obvious things is an illusion natural to dull minds.
Top

Another young white guy would spend up to four hours washing his Porsche, a gift from his dad which he almost never used. He had nowhere to go, really, no one to meet. The entire world had been lost to him, and there was nothing left but the electronic screen.

How many paradise nights in girlie bars would selling that useless Porsche give him?

Often people want to own things but they don’t know why, or they know they must keep up or look better than the Jones’s. Things decay and break down. Memories are more persistent. Buy and own memories.
Top
Post Reply Previous topicNext topic
2 posts • Page 1 of 1