This is not a recent article, so apologies if it has already been posted. If not, worth the read.

Are we helping illegal animal traffickers?
Southeast Asia has long been a hub for the exotic wildlife trade, but the business is increasingly moving online - where unwitting social media users are playing a part in its proliferation
Cristyn Lloyd
March 14, 2018
In a one-minute video uploaded to YouTube in 2015, a beautiful, copper-coloured creature clumsily bounces through a snow-filled zoo enclosure in true exhibitionist style. Displaying its snow-covered belly and large, outstretched paws to the camera, the red panda’s antics struck a chord with many of the four million sets of eyes that have watched the clip.

[Red panda photo taken from WWF website]
The comments left below the video are dominated by paeans to the bushy-tailed animal’s cuteness. “I WANT ONE!” screams one ecstatic fan. “Is it possible 2 own a red panda or any panda as a pet?” wonders another. “My Siberian Husky would love one of these as a playmate!” states a particularly convivial viewer.

Dim-witted but harmless, one might surmise about such comments.

On 12 January, six live red pandas were seized from a minivan in northern Laos about 19km from the country’s border with China. Free the Bears, the wildlife protection organisation that aided the Provincial Department of Forestry Inspection in the rescue operation, says it’s not only the first seizure of red pandas in the country, but the largest red panda confiscation ever recorded. Three died within days, and the rest were delivered to the Luang Prabang Wildlife Sanctuary for treatment.

The International Union for the Conservation of Nature (IUCN), the global body that identifies species’ status of conservation, lists red pandas as officially ‘endangered’, estimating a 50% decline in the mammal’s population over the past two decades.
Three of the six red pandas confiscated from a wildlife trafficker in January this year

According to Rod Mabin, regional communications director of Free the Bears and part of the team that supported the rescue operation in Laos, the unprecedented nature of the capture points to a worrying increase in demand for the animals as exotic pets. “There’s very little record of live red pandas being moved around. This is really unusual – the size, six, is historic. There’s never been so many… We never in our wildest dreams expected that we would see red pandas,” he says, referring to the fact that the red panda is native to the eastern Himalayas and southwest China and is not known to live in the wild in Laos. It is assumed that the animals were en route to Thailand, a hub for wildlife trafficking.

A 2015 study by the Nocturnal Primate Research Group at Oxford Brookes University explored how social media and online videos can change an audience’s perception of the slow loris. 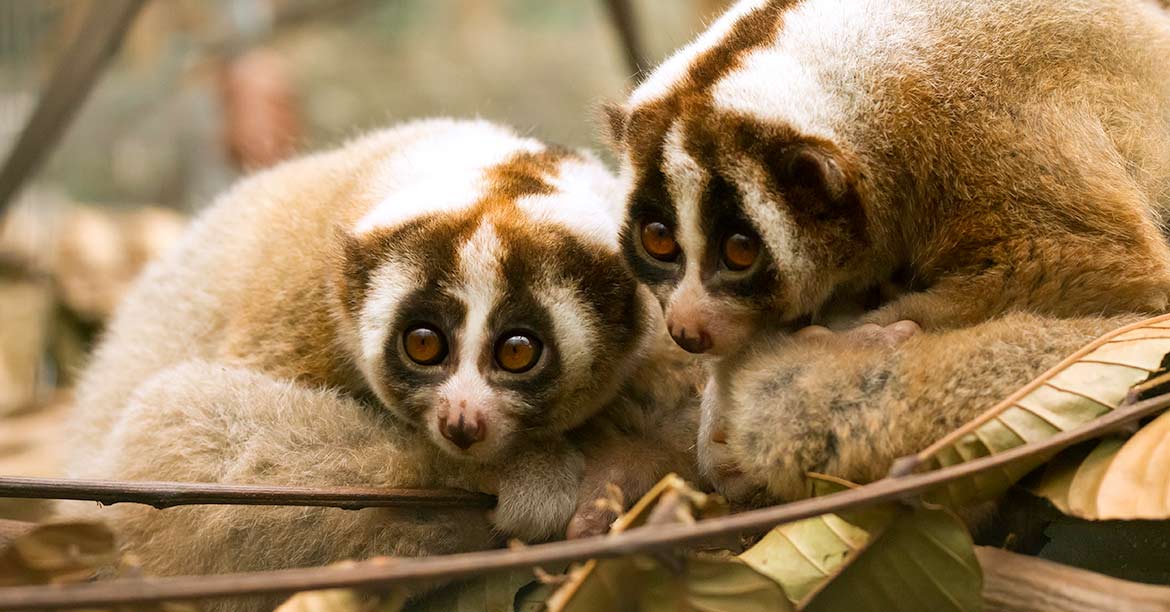 The slow loris, native to countries across Southeast Asia, particularly Malaysia and Indonesia, has shot to similar levels of social media fame. These furry, nocturnal creatures, about the size of a rabbit, have captured the attention of millions with their irresistibly wide eyes and slow, delicate movements. The IUCN classifies all eight species of the slow loris between ‘vulnerable’ and ‘critically endangered’, and the Convention on International Trade in Endangered Species of Wild Fauna and Flora (Cites) bans all international trade of the animal.

A 2015 study by the Nocturnal Primate Research Group at Oxford Brookes University explored how social media and online videos can change an audience’s perception of the slow loris by examining the content of videos in relation to viewer engagement, measured in ‘thumbs ups’ and comments. In all 100 of the videos studied, about a third of which came from Japan, at least one of the ‘five freedoms’ of animal welfare was violated, and videos where harmful behaviour was shown were statistically met with a higher proportion of positive audience engagement.

The most popular videos, for example, show the loris raising its small, clawed hands above its head as it is scratched by an amused owner. This is, in fact, a defence posture. The videos were usually met with comments describing the loris as “cute” or expressing a longing to own one as a pet, despite the videos showing all five signs of mistreatment for animals unsuitable to be kept as pets: human contact; an unnatural environment; signs of stress; daylight; and separation from members of the same species.

A more recent study from July last year by the same research group found that the use of the slow loris as a photo prop had gained traction as far away as Turkey – 7,000km from its natural habitat of Southeast Asia.

Christine Rattel, programme advisor at International Animal Rescue’s slow loris centre in West Java, Indonesia, the biggest centre for slow lorises in the world, agrees that this kind of engagement is built on misinformation. “I think that the main problem [when] wildlife is presented in cute ways is that people just don’t understand they are not pets, they are not domesticated,” she says. “People don’t think in general – it’s just childish… They see slow lorises are cute, they want it.”
Full article: https://southeastasiaglobe.com/exotic-wildlife-trade/
Cambodia Expats Online: Bringing you breaking news from Cambodia before you read it anywhere else!

I've seen dead Slow Loris spatched out on a frame and then pounded up over days into charcoal. I don't believe the pet trade is as significant in their decline as much as traditional medicine is.
Silence, exile, and cunning.
Top

You are right John, ^^
but the "unconventional" pet trade stimulated by these videos is starting to be a major factor for some species.
I know otters, particularly the Asian small-clawed, are taking off big time as flavour of the month for the pampered rich in some places.

Who to contact if you see a "cute" wildlife pet for sale ? 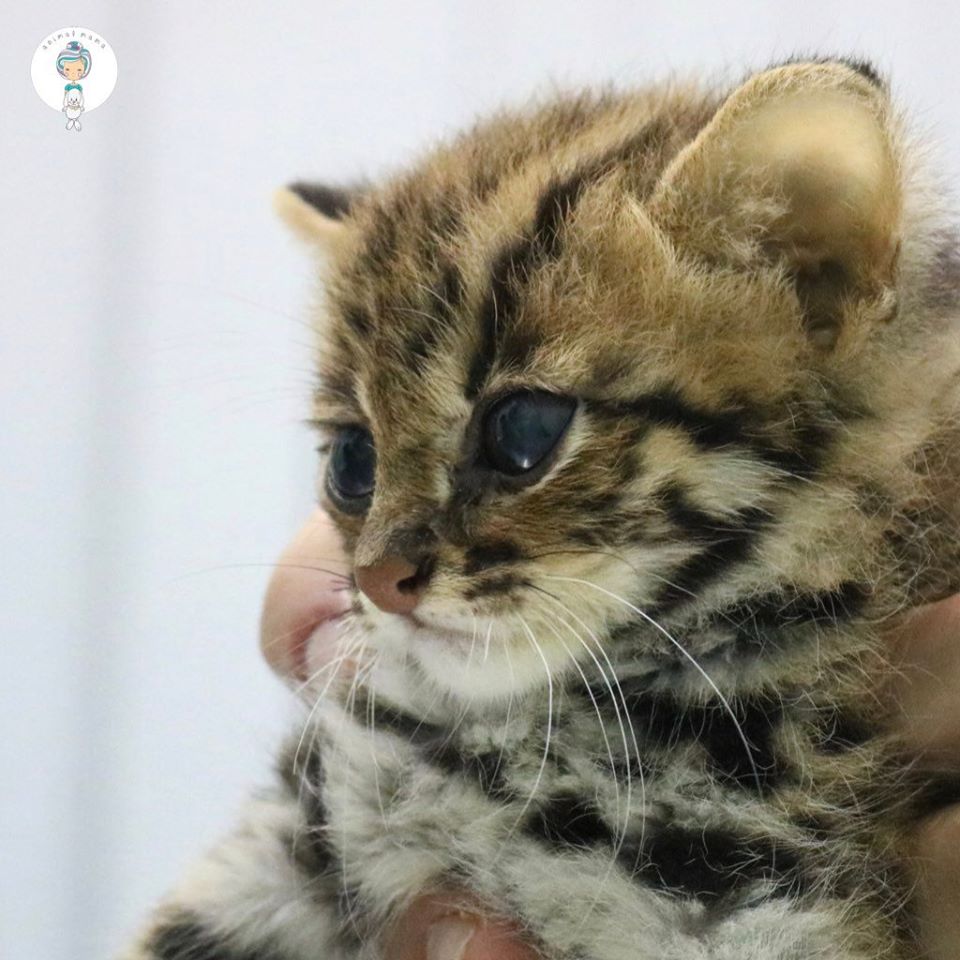 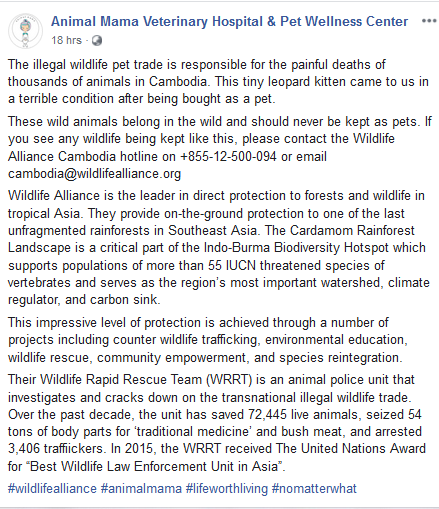 The illegal wildlife pet trade is responsible for the painful deaths of thousands of animals in Cambodia. This tiny leopard kitten came to us in a terrible condition after being bought as a pet.

These wild animals belong in the wild and should never be kept as pets. If you see any wildlife being kept like this, please contact the Wildlife Alliance Cambodia hotline on +855-12-500-094 or email [email protected]

Wildlife Alliance is the leader in direct protection to forests and wildlife in tropical Asia. They provide on-the-ground protection to one of the last unfragmented rainforests in Southeast Asia. The Cardamom Rainforest Landscape is a critical part of the Indo-Burma Biodiversity Hotspot which supports populations of more than 55 IUCN threatened species of vertebrates and serves as the region’s most important watershed, climate regulator, and carbon sink.

This impressive level of protection is achieved through a number of projects including counter wildlife trafficking, environmental education, wildlife rescue, community empowerment, and species reintegration.

Their Wildlife Rapid Rescue Team (WRRT) is an animal police unit that investigates and cracks down on the transnational illegal wildlife trade. Over the past decade, the unit has saved 72,445 live animals, seized 54 tons of body parts for ‘traditional medicine’ and bush meat, and arrested 3,406 traffiickers. In 2015, the WRRT received The United Nations Award for “Best Wildlife Law Enforcement Unit in Asia”.

SternAAlbifrons wrote: ↑Sat Oct 05, 2019 3:17 am You are right John, ^^
but the "unconventional" pet trade stimulated by these videos is starting to be a major factor for some species.
I know otters, particularly the Asian small-clawed, are taking off big time as flavour of the month for the pampered rich in some places.

Yep Pczzzy ^^^ definitely an affectation of the rich.
A cute cuddly Red Panda or Small-clawed otter for the pampered kid.
and owning or eating a tiger for Dad.
For themselves, yeah a bit, to satisfy their ignorant pleasures - but mostly to flaunt as status raisers.

Don't get me wrong. I am just saying i can understand it because i occasionally see it in myself -
the reasoning behind the worst of 1975-79.
Top
Post Reply Previous topicNext topic
6 posts • Page 1 of 1