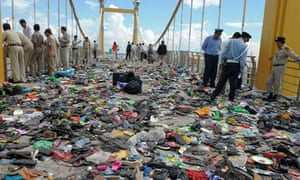 Police begin their investigations amid the belongings left behind by victims of the festival crush on Rainbow Bridge. Photograph: Tang Chhin Sothy/AFP/Getty Images

The Diamond Island stampede powerfully illustrates how people confronted by mass disaster draw on cultural and religious explanations for misfortune,

An ethnographic study was carried out in Phnom Penh and nine provinces, starting in 2010, with cases followed up for up to eight years. We explored the beliefs about the causes and meaning of the disaster held by 5 survivors and 8 of their family members, 34 bereaved relatives of 9 people who had been killed, 31 villagers, and 48 key informants (7 monks, 10 female Buddhist lay devotees, 22 Buddhist lay officiants, 4 mediums, and 5 traditional healers).

Although the bridge was designed to sway, a stampede was triggered when people shouted, “The bridge is breaking!” and began to run. However, the exit was too narrow and had been barricaded by a chain to prevent motorbikes from entering. The crowd surged back and forth, trying to get off each end of the bridge and crushing those in the center.

It was popularly believed that the disaster was a consequence of the supernatural “dark road” and the neoliberal development and disrespect to the Landlords of Water and Earth guardian spirits that triggered a retaliation by the spirits. Millenarian explanations for disaster were foretold through the “Buddha Predictions” and the “Three Vast Plains” of disaster.

Davy had been in the throng and said that she had heard supernatural voices of the “dark way” screaming on the bridge to people who had no astrological misfortune to get off the bridge before it was too late – that was how, in panic, she pushed herself to the entrance of the bridge and escaped the worst of it at the center. For a moment, there was a whirlwind and then the panic began.

The investigating committee, which included cabinet ministers and city officials, estimated that 7000–8000 people were on the bridge, adding up to a load of about 350 tons

In Cambodia, a powerful idiom used by many informants was “the dark road” (pləv ŋɔŋɨt), a term derived from the Vietnamese nghịt, meaning something thick and dense, black as the night [107]. The “dark road” implies potentially lethal forces such as a curse from the world so dark that it cannot be seen by humans and only dogs can see these forces. One young man, Vannara, saw the “dark way” literally, as venomous snakes were enraged that the developers had dislodged their nest and were lying in wait under the bridge, ready to avenge their loss by casting mass disaster at that place. Even two years later, Vannara dared not cross, and he would hear others talking in fear about the den of snakes under the bridge, waiting to strike.

Yamarāja is the symbol of death and judgment in ancient Cambodia from the reign of Jayavarman IV (921–941) [109]. He is depicted as the symbol of the Supreme Court [110] even today and is commonly invoked in popular depictions of all kinds of death. Faced with such lethal symbols of death, the ritual sacrifices fortified and re-moralized many people, who felt that at least now they had regained some control.

The “Buddha Predictions” are seen to forecast endemic violence in Cambodia [127,128]. According to Ledgerwood [15], the Buddh Damnāy included the forecast that during the 1950s, there would be a period of death and destruction and that the ignorant savages will come to rule the nation. In a similar vein, people also draw upon it to make sense of national catastrophes such as the Khmer Rouge regime [129,130].

The local realities of the stampede are situated in the national context and, above all, uncover the “local risk perception and interpretation, local participation, and the inclusion of local knowledge” (p. 76). This perspective offers potential in relating disaster to morality and the notions of social and cosmic justice. An emic understanding that illuminates local risk perception and interpretation and the inclusion of local knowledge can underpin culturally sensitive responses to disasters.

full https://www.sciencedirect.com/science/a ... 0919312543
The idea that seeing the world is going from place to place to look at obvious things is an illusion natural to dull minds.
Top

The bridge exit was blocked with full barracades and police would not let them pass. They were told initially to go back the other way. The only cultural explanation was to cover up the incompetant authorities who denied any culpability.
Top

canucklhead wrote: ↑Tue Dec 17, 2019 1:57 pm The bridge exit was blocked with full barracades and police would not let them pass. They were told initially to go back the other way. The only cultural explanation was to cover up the incompetant authorities who denied any culpability.

A Swiss man built a large home with a swimming pool a couple of towns over. One day a large piece of the kitchen ceiling fell down on the table just as he had finished his breakfast. It is because there must be an ancient burial ground on his property that he disturbed. There is absolutely no other explanation that could be possible. Many villagers will not go to his home and their children are forbidden to play in his pool. I took my father in law to Siem Reap and he absolutely enjoyed himself and his opinion of Cambodians changed completely, (Thais are very ethnocentric). He was a county-level government official and middle class Thai by Isaan standards. On the way back he told me Angkor Wat was built when Khmers were 10 meters tall. My wife is university educated, once we stayed in a hotel in Bangkok and her heart started to race. We went to the car and brought the amulet she keeps on the dash and slept with it under the pillow. The amulet protected her from the evil spirits that inhabited the hotel.She once asked if I believed in spirits and I informed her I did not she was shocked, How was it possible when I had seen evidence of them at the hotel?
A few years ago dolls of children that had the spirits of children in them were the "ghost" of the month. I sat and watched a woman feed hers in an airport lounge. Thai Airlines even advertised that they offered tickets for these spirited dolls. I commented on the absurdity of it to a well educated Chinese from Singapore. He said with a straight face that I should not judge things I did not understand. It is foolish to underestimate the beliefs of supernatural powers and the effect these beliefs have on locals.
Top

canucklhead wrote: ↑Tue Dec 17, 2019 1:57 pm The bridge exit was blocked with full barracades and police would not let them pass. They were told initially to go back the other way. The only cultural explanation was to cover up the incompetant authorities who denied any culpability.

And this bit is a load of bollocks too, "a stampede was triggered when people shouted, “The bridge is breaking!”"

There was no stampede, it was an electrocution. Where's the missing video, the one which shows what really happened.

https://cchrcambodia.org/admin/media/an ... 0(ENG).pdf
Who let all of this riff-raff into the room?

Users browsing this forum: No registered users and 162 guests