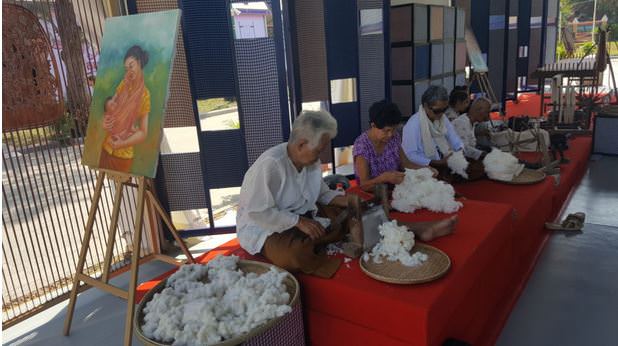 On February 13, 2018, the Kingdom of Cambodia opened a six-month exclusive event in front of the National Museum to begin weaving the world’s longest krama, as part of a mission to enter the Guinness Book of World Records, an initiative started by Sann Vathana of GoGo Cambodia. The event serves to highlight the history of the krama, the traditional checkered scarf unique to Khmer culture.

The exhibition is an event for all ages and nationalities looking to learn more about the artistic side of the Khmer culture, and add a few centimeters of their own to the large krama. The exhibition takes place at the newly refinished Veal Preah Merou park, located in between The Royal Palace and the National Museum. Both sites are a part of the tuk-tuk experience offered here.

At the 1000 meters of Krama festival, cultural and historical educational exhibits are scattered throughout the enclosed shady sanctuary. There is also a school that teaches the cotton hand spinning profession’s skills and ancient secrets. You will be mesmerized and humbled by the process of hand spinning, dyeing, and weaving the krama scarf.

https://blog.camboticket.com/1000-meter ... hnom-penh/
Cambodia Expats Online: Bringing you breaking news from Cambodia before you read it anywhere else! 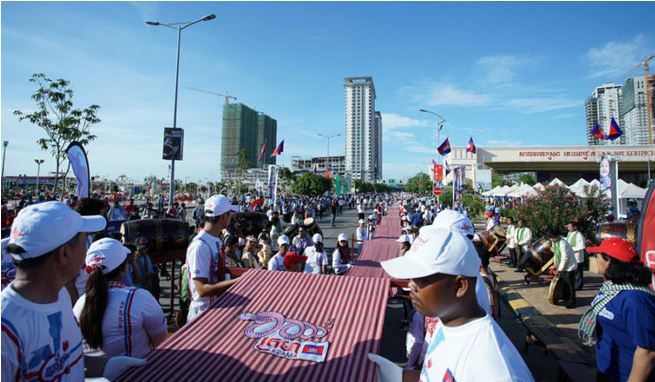 It' s done. After months of preparation, the world's longest ever krama, certified by the Guinness Book, has been completed. The object of this awe-inspiring feat was to install national pride and promote national unity. 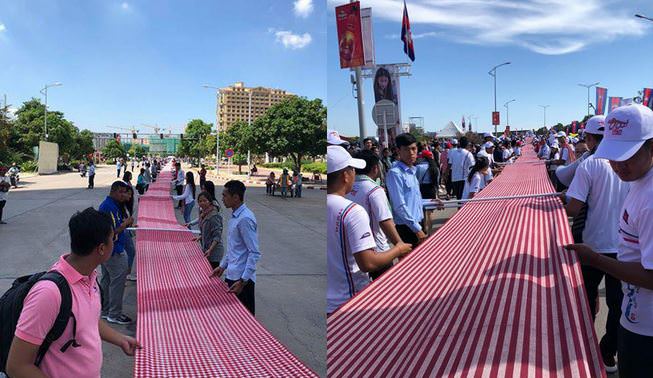 The 1000m long Cambodian scarf was woven by nearly 20,000 people since the challenge was launched in February, including the king and the PM, but also people from all walks of life.

Deleted
The idea that seeing the world is going from place to place to look at obvious things is an illusion natural to dull minds.
Top

The weaving of the longest krama for the Guinness Book of Records has been a big success with locals and tourists alike. 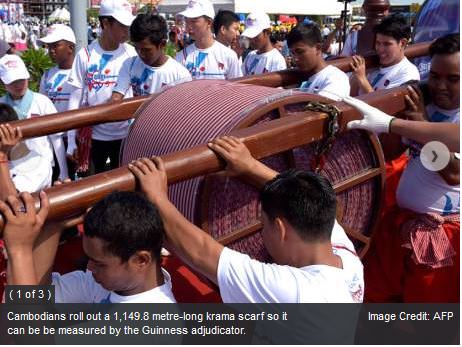 It was made by weavers from 20 krama-weaving communities and thousands of tourists who also added a few centimetres when they visited its weaving site in front of the National Museum in Phnom Penh.

Cambodia was the first country that had attempted to break the Guinness World Records for the longest scarf, he said, adding that the basic criteria for this attempt were that the scarf must be 30.5 cm wide and at least 1,000 metres long.

Krama, which is made of cotton, is commonly used in Cambodia, and it reflects the Khmer culture and traditions, said Sann Vathana, head of GoGo Cambodia, an organisation that launched the campaign.
https://gulfnews.com/news/asia/tourists ... -1.2244704
Cambodia Expats Online: Bringing you breaking news from Cambodia before you read it anywhere else!

The official inauguration ceremony of exhibition was held Sunday morning at the National Museum, presided over by Phoeung Sackona, Minister of Culture and Fine Arts, Khoung Sreng, Phnom Penh Governor, Hun Many, President of the Union of Youth Federations of Cambodia (UYFC), and Say Sam Al, Vice-President of UYFC.

The 1,000 Meters Hand Woven Scarf or Krama is organized by GoGo Cambodia, an organization established by youths to promote Cambodian national pride, under the spirit of “Believe Khmer Can”.

Krama weaving was commenced on 14 February 2018 under the patronage of King Nordom Sihamoni, Her Majesty Queen Mother Norodom Monineath Sihanouk, and Samdech Kittipritbandit Bun Rany HE.
http://en.freshnewsasia.com/index.php/e ... 08-18.html
Cambodia Expats Online: Bringing you breaking news from Cambodia before you read it anywhere else!