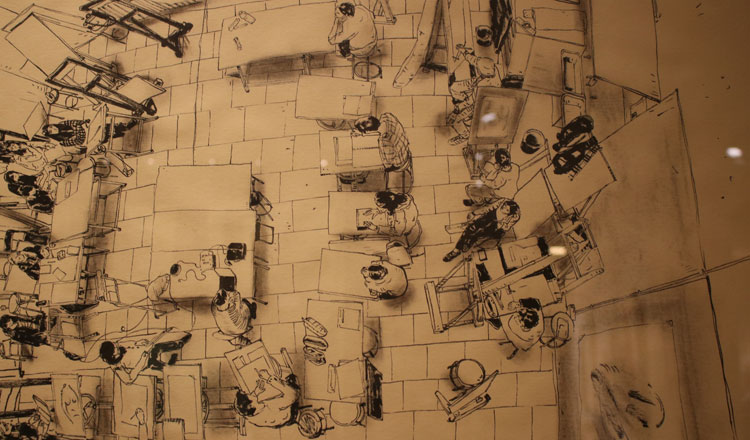 "My purpose on this exhibition is to bring different creative concepts to Cambodia to encourage and inspire young people to value Cambodian artwork.”

What do ‘a homeless man on the street, students in a painting class sketching nudes and an ogre from a Khmer myth’ have in common? Maybe nothing, except for they are among the subjects of artworks featured by two well-known Cambodian artists in their first dual exhibition at Rosewood Phnom Penh’s Art Gallery. The forms of their works could be described as completely different, but there is one thing that binds the two artists – the reflection on human life. Story by Taing Rinith.

One fateful day last year, in Italy, he got to know Ranon Phal, another young Cambodian artist who was studying classical techniques at the Academy of Fine Arts in Milan, as well as being a leukemia survivor. Unlike FONKi, Ranon is into making detail painting, but he also shares FONKi’s love on drawing human life, as well as contemporary artistic aspects.

The two Cambodian artists got along so well once they met. They became fast friends, and planned to work on something together. The plan has evolved to become a new step in reality with their first dual exhibition dubbed Khmer Renaissance, organised by Rosewood Phnom Penh’s Art Gallery.

full https://www.khmertimeskh.com/660229/vie ... naissance/
The idea that seeing the world is going from place to place to look at obvious things is an illusion natural to dull minds.
Top
Post Reply Previous topicNext topic
1 post • Page 1 of 1