The Story of The King’s Photographer

The Story of The King’s Photographer 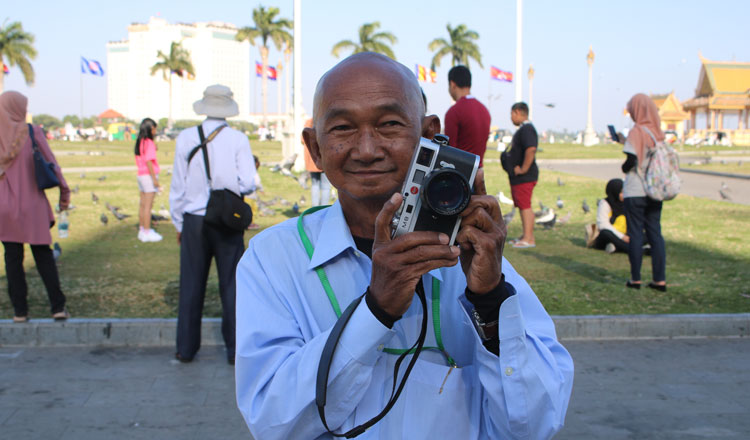 Not many know, but 75-years-old Yim Samel has been a Royal photographer for almost 20 year . GT2/ Taing Rinith

“At the time that I got there, some of the vultures were still feeding on the dead bodies of the poor prisoners.”

Yim Samel’s name may not ring a bell to most people, but he is synonymous with photographers who are based in Cambodia as he is known as the one who takes pictures for the King in the Royal Palace.

It is early one Thursday morning in front of the Royal Palace, located in the heart of the city on the bank of Chaktomuk River. The atmosphere is still peaceful and quiet. Many shops are not open yet. Many were still slumbering in their homes, save for a few residents who were jogging or cycling for their health. Among those cycling is an aged man, carrying a German made Leica camera.

Around his neck, Samel wears a small portrait of the late King Norodom Sihanouk, which he took years ago. Another picture which he wears as a good luck charm is the one showing His Majesty Norodom Sihamoni holding a golden urn containing the remains of his father, which Samel took during King Sihanouk’s funeral in 2012.

“My grandfather went on a state visit with King Sihanouk to France to perform in the Royal Band and when he returned, he brought back a French camera,” Samel says. “That was when photography came into my life for the first time.”

“I learned how to take good pictures from French experts in Cambodia, but at the same time, I studied how to print pictures by being an apprentice at one of the biggest photograph printing shop run by a Chinese owner in Phnom Penh,” Samel says.“At that time, not so many Cambodians could do that.”

For almost two decades, Samel has been working tirelessly, despite his old age, for King Norodom Sihanouk and later his son King Norodom Sihamoni. He has also accompanied them to 31 countries.

full https://www.khmertimeskh.com/50669779/t ... tographer/
The idea that seeing the world is going from place to place to look at obvious things is an illusion natural to dull minds.
Top
Post Reply Previous topicNext topic
1 post • Page 1 of 1

Users browsing this forum: No registered users and 154 guests