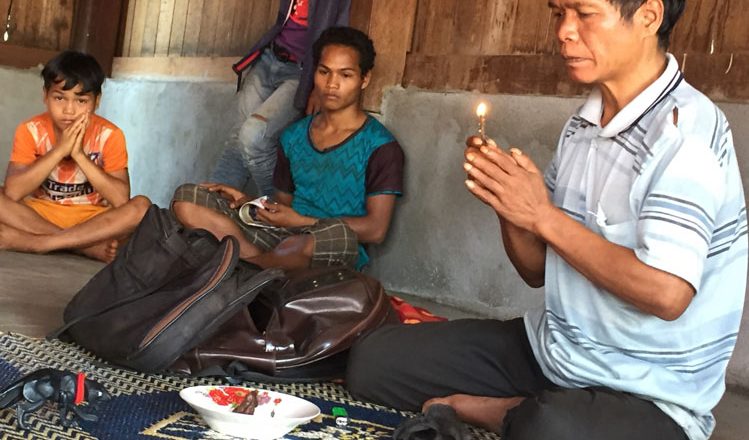 My work as a journalist has provided me the opportunity to travel to remote parts of Cambodia and meet some truly inspiring people. This was the case two years ago when I was covering a story on gold mining in the northeastern province of Ratanakiri.

We first wanted to do a follow up on a supposed village in the area that had been pretty much decimated because of a black magic curse. While I can recall the village was indeed sparse, I cannot confirm or deny the existence of black magic there.Keeping in tempo with our curiosity for spiritual practices we asked our tour guides if they knew any reputable Kru Khmers or healers. In Cambodia, supernatural beings are widely believed to be responsible for a range of health and spiritual problems, from mental illness to chronic pain. The Kru Khmer fills a critical need in a country short on doctors and trained pharmacists.

Our journey began when we reached Saleav village. We were told he wasn’t there and had left a day earlier to do healing work in neighbouring villages. His family, instead of shooing us away, encouraged us to look for him. We searched in two villages and finally found him in Tien village in Ke Chong commune, deep in a rubber plantation.

“I had been waiting for both of you to come and see me,” said Kweh Tien, as we climbed up the wooden stairs into the hut, where he was praying over a sick man. “I had a dream that there will be two people visiting me from Phnom Penh.”

“When the baby is born, come back and stay with me for a week,” he said. The Tampuan healer did not go into much detail but said there were some protection rituals he would like to do. One of the things needed was my newborn son’s umbilical cord, so I was instructed to tell the doctor not to throw it out.

Full https://www.khmertimeskh.com/544466/the ... al-healer/
The idea that seeing the world is going from place to place to look at obvious things is an illusion natural to dull minds.
Top
Post Reply Previous topicNext topic
1 post • Page 1 of 1

Users browsing this forum: No registered users and 195 guests