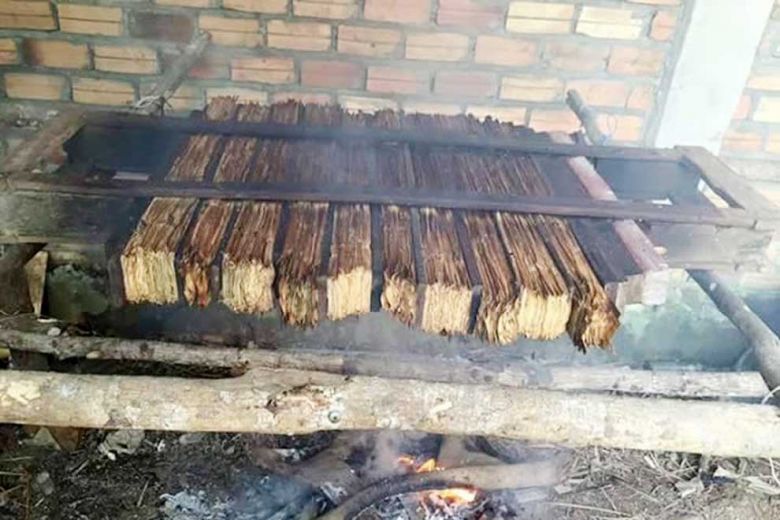 Dried palm leafs are smoke-treated for a few days before they are durable enough to be used for making the manuscripts. Photo supplied

Being a palm leaf inscriber comes with different challenges. For one, it isn’t exactly a recipe for fame or fortune

At the young age of 15, Lorth Loeng, who is now 36, entered monkhood. In 2001 – a year after he first started wearing the yellow robe – he began mastering the trade of inking palm leaves in a pagoda in Siem Reap province.

His childhood fascination for the ancient art of inscribing manuscripts has now turned into a venture that supports his family’s daily living.“My wife sells brooms made from grass and wild fruits while I work on palm leaf manuscripts. My three daughters, through practice and my guidance, are now picking up the skill little by little. One of them is among one of my 10 students

Believed to have begun in India and Southeast Asia around the 5th century BCE, palm leaf manuscripts in Cambodia were made for inscribing “Tripitaka” – also called as Preah Trai Bekdok in Khmer – which are sacred Buddhist scriptures that contain the teachings of Buddha.

“Each sheet is sold at 15,000 riel but is sometimes sold less because most of the buyers are not rich. They buy it because of their love for Khmer art, culture, and literature,” says Loeng.­­­

full https://www.phnompenhpost.com/lifestyle ... anuscripts
The idea that seeing the world is going from place to place to look at obvious things is an illusion natural to dull minds.
Top

Re: Preserving the ancient craft of making palm leaf manuscripts

Thank you for linking this in Kung-Fu Billy,
nice light morning read, just wish the old palm leaf manu.'s had some more staying power but the craft is indeed a lovely part of history.

Users browsing this forum: No registered users and 112 guests