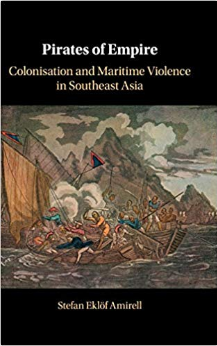 The pledges of the Cambodians to do their utmost to suppress piracy, however, were of little practical value, because the Cambodian government lacked the means by which to control the country....According to Garnier, Dinh Tuong suffered heavily from attacks by pirates, who took refuge and found protection in Cambodia.

The result was that after four years of French rule more than half of the population of the province had fled to Vietnamese territory, and whole villages and towns were deserted. There was no denying, Garnier argued, that these unfortunate circumstances derived more or less from the peculiar borders of the French possessions in Cochinchina. The solution, he advocated, was the extension of French sovereignty in southern Vietnam in order to improve the security situation.44

In the case of French vessels being attacked or plundered by pirates in waters governed by the Kingdom of Cambodia, the local authority in the closest location, as soon as it gains information about the event, shall actively follow the perpetrators and not spare any effort in order that they be arrested and punished according to the law. The seized cargo, regardless of in which place it is found or in what condition, shall be returned to the owners, or, in their absence, to the hands of a French authority that will take responsibility for its return. If it is impossible to seize those responsible or to recover all of the stolen objects, the Cambodian officials, after having proved that they have done their utmost to obtain this goal, shall not be held financially responsibl

Three junks, each manned by thirty or forty ruffians, surrounded the ‘Caldera’. These creatures seemed like demons, born of the tempest, and bent upon completing our destruction. Having boarded the ‘Caldera’ by means of grappling-hooks, they were now dancing an infernal dance upon deck, and uttering cries which sounded like nothing human. The smashing of the glass awoke our whole crew, and the light which we had taken for a fire at sea was occasioned by the bursting of fiery balls which they cast on deck to frighten us. Calculating upon this method of alarming their victims, they attack vessels chiefly in the night, and seldom meet with any resistance … They were dressed like all other Chinese, except that they wore scarlet turbans on their heads, and round their waists broad leather belts garnished with knives and pistols. In addition to this, each man carried in his hand a naked sword.


Considering that the three accused have come to surrender themselves, but only two days after the execution of Huan [an alleged rebel executed by the authorities] and that, judging from their physical constitution [leur physique], they seem to have been born to piracy and rebellion, and that they have made but incomplete confessions; [We] declare them guilty of rebellion, etc., etc., and judge all three of them to decapitation and ask that their punishment be commuted to ten years’ detention at Poulo-Condore.

One gang of pirates, captured in 1880, sent forward a female member of the band to capture children onshore, a method that was seen as particularly objectionable both in Vietnamese and French eyes. The woman was found guilty to a higher degree than her accomplices by the Vietnamese court that handled the case, and she was sentenced to execution by strangling, rather than decapitation, which was the punishment that the other members of the band received.

full https://www.cambridge.org/core/books/pi ... ore-reader
The idea that seeing the world is going from place to place to look at obvious things is an illusion natural to dull minds.
Top
Post Reply Previous topicNext topic
1 post • Page 1 of 1