Provincial Department of Environment director Sun Kong said yesterday the head portion of the broken statue was found by a resident on Saturday and the officials went to inspect the site on Sunday.

He added that the statue was made of sandstone during the sixth century and the body was broken into pieces, noting that officials found 13 pieces of the body nearby the site.

Mr Kong said: “According to the experts, this Makara animal statue is one that we have never seen before. It is approximately 2.14 metres in length and about 0.97 metres high. We have not yet moved the body parts or excavated the head from the site and have told park rangers in the area to guard it in order for officials from relevant ministries and institutions to come and study in detail about the site’s history and reconstruct the pieces.”

He noted that experts have not found a foundation of any temple at the site and believe it was just carved out on the rock.
https://www.khmertimeskh.com/50681625/a ... -siem-reap
Cambodia Expats Online: Bringing you breaking news from Cambodia before you read it anywhere else!

29 January, 2020 - 13:59 Ed Whelan
Never Seen Before Makara Statue Found in Cambodia
In Cambodia, a magnificent but mysterious statue has been found in a forested area in a national park. The statue is of a mythical creature known as Makara. This discovery is like nothing else that has been found before and it is expected to throw light on the culture in Cambodia before the emergence of the Khmer Empire (800 AD to 1431 AD). 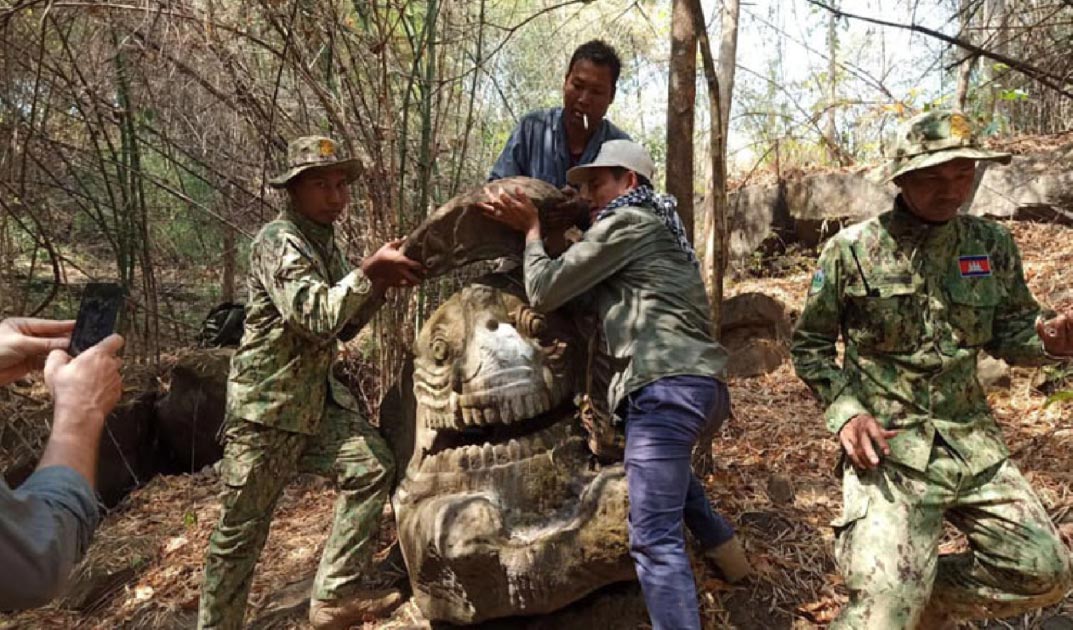 The amazing sculpted figure was found in Phnom Kulen National Park, which is in Siem Reap province. This area has many important temples, and the area holds a special place in the history of the Khmer Empire. The find was made by a local craftsman Chhim Samrithy, 38, who stated that, ‘I usually walk in the forest to look for some unique and sacred objects and suddenly spotted this rare statue,’ reports Archaeology News Network . He came across a massive head that had been carved into a rock and he immediately contacted local officials.

Officials and archaeologists were shown the location of the find and they began to survey the object and its context. Only the head portion of the statue was found and most of the body appears to be missing. The head is substantial - approximately 6 feet (2.14 meters) long and 3 feet (1m) high. Chhim SaImrithy and others began to search for the missing pieces of the sculpture. In total, some 13 pieces of the body of the sculpture were found. Experts estimate that the figure dates to the 6 th century AD, sometime before the foundation of the Khmer Empire, best known for its astonishing capital Angor Wat.

The had been made by carving sandstone and the head is still in good condition. The director of the Provincial Department of the Environment, Sun Kong told the Khmer Times ‘we have not yet statue moved the body parts or excavated the head from the site’. Park officials have been ordered to guard the site until it can be further investigated by researchers and to protect the site from looters and thieves.
https://www.ancient-origins.net/news-hi ... ra-0013213
Cambodia Expats Online: Bringing you breaking news from Cambodia before you read it anywhere else!

What is a makara and what does it mean?
From wikipedia:
Makara is a Sanskrit word which means "sea dragon" or "water-monster". It is the origin of the Hindi word for crocodile, मगर (magar), which has in turn been loaned into English as the name of the Mugger crocodile, the most common crocodile in India.

Traditionally, a makara is considered to be an aquatic mythical creature. Makara has been depicted typically as half mammal and half fish. Some traditional accounts identify it with a crocodile, specifically the Mugger because of its etymological roots. It is depicted with the forequarters of an elephant and the hindquarters as a fish tail. Crocodile was also a form which was used in the earlier days which was shown with human body.

In many temples, the depiction is in the form of half fish or seal with head of an elephant. It is also shown with head and jaws resembling a crocodile, an elephant trunk with scales of fish and a peacock tail.[7] Other accounts identify it with Gangetic Dolphin having striking resemblances with the latter, now found mainly in Vikramshila Gangetic Dolphin Sanctuary. Others portray it as a fish body with an elephant's head. The tradition identifies the makara with water, the source of all existence and fertility. 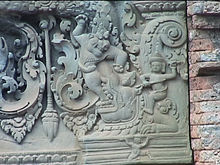 Makaras are also a characteristic motif of the religious Khmer architecture of the Angkor region of Cambodia which was the capital of the Khmer Empire. Makaras are usually part of the decorative carving on a lintel, tympanum, or wall. Makaras are usually depicted with another symbolic animal, such as a lion, naga or serpent, emerging from its gaping open mouth. Makara are a central design motif in the beautiful lintels of the Roluos group of temples: Preah Ko, Bakong, and Lolei. At Banteay Srei, carvings of makaras disgorging other monsters were installed on many of the buildings' corners.
https://en.wikipedia.org/wiki/Makara
Cambodia Expats Online: Bringing you breaking news from Cambodia before you read it anywhere else!

Wonder how many related artifacts illegal loggers have stumbled across.
Top