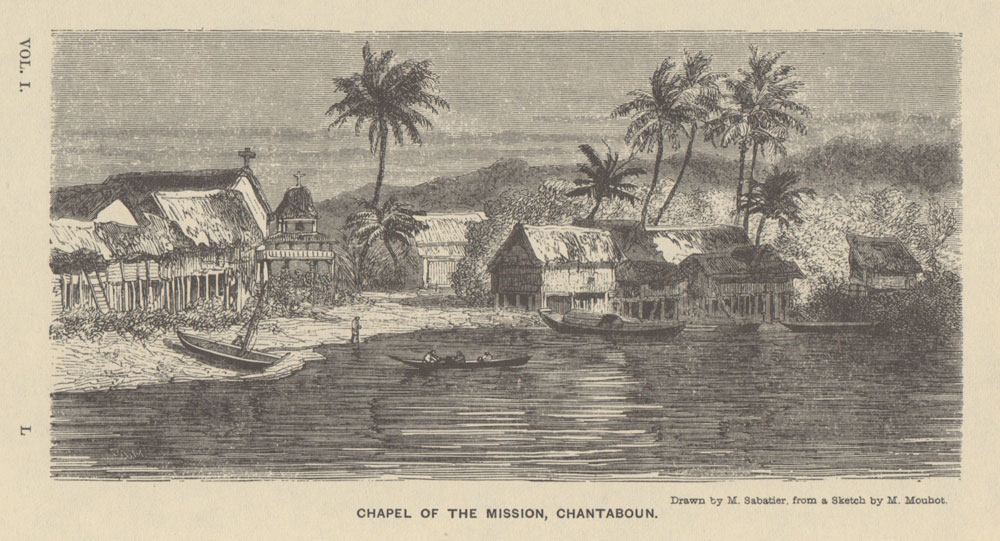 Chapel of the Mission, Chantaboun (Chanthaburi). Lying beside the Chanthaburi river, this small chapel, founded in 1707 A.D., has grown into the largest Catholic church in Thailand. Today the impressive Gothic structure is known as the Mary Immaculate Conception Cathedral. From Mouhot (1864) Travels in the Central Parts of Indo-China (Siam), Cambodia, and Laos, during the Years 1858, 1859, and 1860.

In ancient times, Chanthaburi had no gems. Suddenly during a dark night, villagers saw a light glittering in the sky and then watched it drop in the area of Khao Ploi Waen. People ran after the light and saw green rays coming out of a hole...

The traditional center of gem mining and trading in Thailand and Cambodia is the town of Chanthaburi. Historical accounts put the founding of Chanthaburi by the Chong ('Xong'), a Mon-Khmer tribe, in the 12th century AD. But 2,000 year-old stone tools found in the area suggest humans have long inhabited the region.

Following the destruction of Thailand's Ayutthaya Kingdom in 1767 by the invading Burmese army, Taksin and his 500-man army occupied Chanthaburi for five months. Legend has it that many of his soldiers were Chinese, so he retreated to the place with the largest Chinese population (Chanthaburi). But even this retreat was made difficult. The governor of Chanthaburi did not welcome him, and thus Taksin and his troops had to fight to subdue both Chanthaburi and Trat.

The French arrived after the Shan. French colonialist troops occupied Chanthaburi for 11 years, starting in 1893, following the Paknam crisis. In 1905, Chanthaburi was returned to Thailand, who in turn was forced to give up ownership of a portion of western Cambodia, including Pailin. 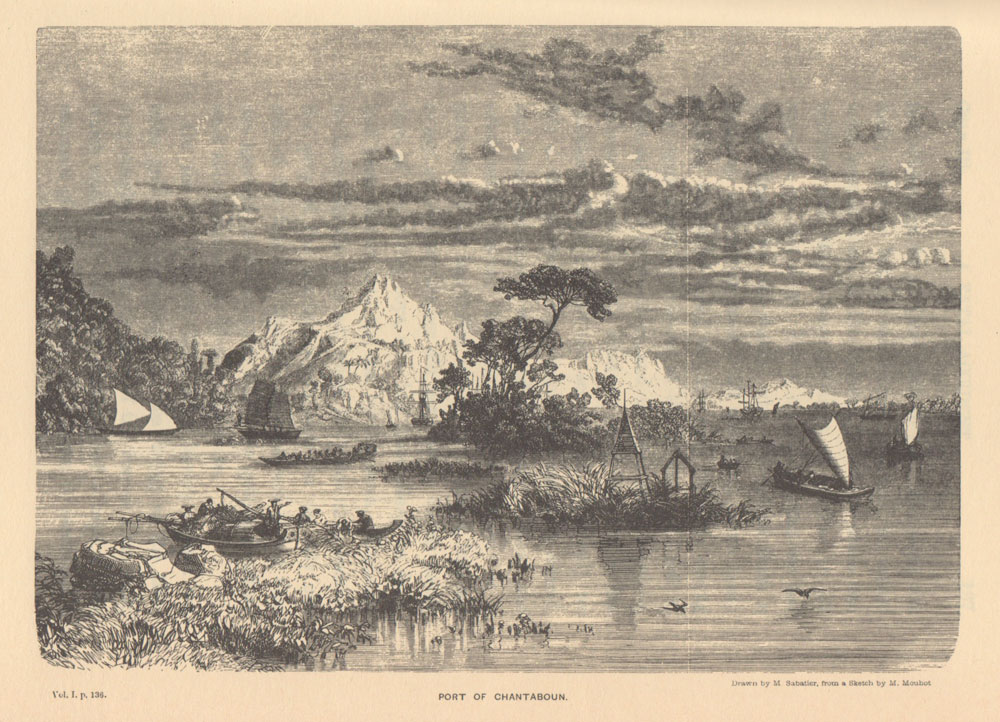 The rubies and sapphires of this region are principally derived from the Thai-Cambodian border region, with mines lying on both sides of the frontier. For this reason, the deposits of both countries will be discussed together. References to the mines in eastern Thailand should also be understood to include those across the border in Cambodia.

A hundred li (twenty miles) to the S.W. of this Kingdom there is a trading place Shang-Shui, which is on the road to Yun-hou-mên, [possibly a canal between Chanthaburi and Trat Provinces in eastern Thailand]. In this place there are five or six hundred foreign families, who sell all kinds of foreign goods; many Hung-ma-sze-kên-ti stones are sold there. This stone is an inferior kind of ruby, bright and clear like the seeds of the pomegranate.

In 1907, Battambang Province, containing the valuable Pailin mines, was returned to the French in Cambodia. Up until that time, Pailin supplied as much as 90% of the world’s fine sapphires. Although production continued to pass through Chanthaburi and Bangkok, after 1907 Thailand’s production of sapphires dropped dramatically from the loss of Pailin. Discovery of new sapphire mines in Kanchanaburi and Phrae helped somewhat, but with the loss of Pailin, Thailand lost a major portion of its sapphire mining potential.

Phnom Yat figures strongly in Cambodian folklore. As the story goes, people were hunting animals in the forest around Pailin, where they encountered a magical old lady living as a hermit in the mountains, called Yiey (= grandma) Yat, who didn't like the people killing her animals. She told them that if they stopped killing the animals, she would reward them at a certain stream on Mount Yat. The people went there and saw an otter (= pey) playing (= leng) in the stream. The otter swam up to them and opened his mouth, which was full of gems.

full extensive https://www.lotusgemology.com/index.php ... s-gemology
The idea that seeing the world is going from place to place to look at obvious things is an illusion natural to dull minds.
Top

Re: History of Chanthaburi & Pailin Gems.

Was mining rubies/sapphires in Boi Rai, ( 80 kms north east of Chan) and selling in Chantaburi in 1988-late 89
also made a few overland trips into Pailin area, Cambodia in 1988

Although Chantaburi is still a cutting center and a small active gem market still exists but most stones come from Mogok via Mae Sai
In a nation run by swine, all pigs are upward-mobile and the rest of us are fucked until we can put our acts together: not necessarily to win, but mainly to keep from losing completely. HST
Top
Post Reply Previous topicNext topic
2 posts • Page 1 of 1

Users browsing this forum: No registered users and 207 guests