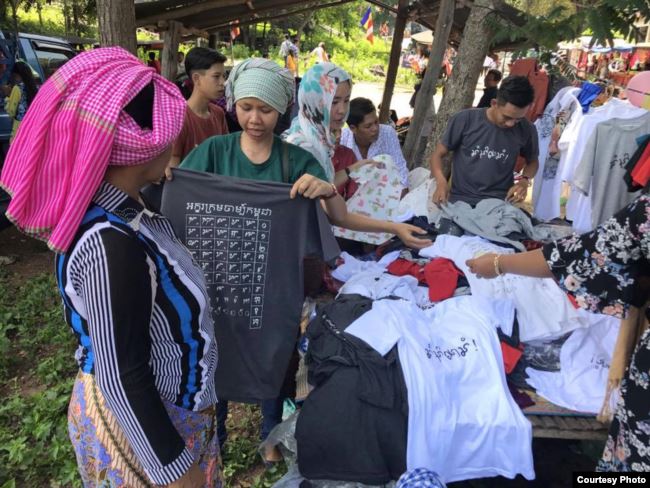 T-shirts printed with Cambodia's Cham alphabets are for sale. According to community members, Cham language and script learning has declined due in part to a lack of its inclusion in formal school curriculum in Cambodia. (Courtesy photo of Leb Ke)

As he grew older, however, he began to realize that fewer and fewer of his fellow villagers continued to speak and read Cham.

The Cham in Cambodia number around 220,000, according to Jean-Michel Filippi, a linguistics professor at the Royal University of Phnom Penh, and have been recognized by the government as a minority in recent decades.

The medieval Hindu Champa Kingdom, based in present-day southern Vietnam, was a major rival to Angkor. As the Vietnamese marched south in over the centuries, the kingdom was eventually annexed by 1832.

About 30,000, who live in villages in Kompong Chhnang, Pursat and Battambang provinces, belong to the Imam Sann Cham, also called the Cham Sot (Pure Cham), who follow a mix of ancient Champa traditions and Islamic practices in which they pray only once a week, according to Filippi.

“In Cambodia, whenever people hear about the Cham language, they think of Malay or Arabic language instead,” he told a conference on “Language and Identity” held at the Institut Français Du Cambodge in April this year. “Even worse, people confuse the authentic Cham script with the Arabic letters.”

Peat Pulla, 23, a fourth-year student in tourism and hospitality management at Norton University in Phnom Penh, said, “The traditional Cham letter has vanished from the Khmer-Muslim community for a while now, though lately there has been some effort to restore, it is still is not available in Phnom Penh.”

full https://www.voacambodia.com/a/cambodias ... 81319.html
The idea that seeing the world is going from place to place to look at obvious things is an illusion natural to dull minds.
Top

The Cham have their own language. They also study Khmer. In the Muslim classes they study Arabic. Those that can, also study English. If their family has enough money, some go to study in Malaysia. I have been told they study in English schools in Malaysia, but they would also learn some Malay.

and they now want them to learn Cham writing.

I think they should learn Chinese too, in their spare time.

It becomes a case of prioritizing. What is most important to study? While it is nice to preserve history, is it important for every member of the Cham community to be able to write Cham script? If they had a choice between studying Cham script, or English, which would be most beneficial?

It is important for people to know their history and their culture. It makes up a part of a person's identity. Especially, when you are a minority.
Top
Post Reply Previous topicNext topic
3 posts • Page 1 of 1