Ask us anything. Cambodia Expat's Online has a huge community of long term expats that can answer any question you may have about life in Cambodia. Have some questions you want to ask before you move to Cambodia? Ask them here. Our community can also answer any questions you have about how to find a job or what kind of work is available for expats in Cambodia, whether you're looking for info about Phnom Penh, Siem Reap or anywhere else in the Kingdom. Don't be shy, ask CEO's members anything!
Post Reply Previous topicNext topic
13 posts

When I go to the Sihanoukville main market to buy pork I've never seen pork cut up like they sell. (done very poorly.) What I am looking for is a whole shoulder bone in (picnic) or a whole rump (ham) bone in. I can't seem to find anything like it or the place where they butcher/wholesale pork. I see the trucks go by with fat pigs but am never fast enough to follow them. I have yet to see proper cuts of pork in Snooky, just chunks of meat.

Of note, the fillet (that's what they call it) beef that Dan's Meats is selling in Snooky is actually sphincter muscle (actually a good piece of beef) and I used to use it for taco meat in a upmarket Mexican restaurant years ago. The "fillet" meat I get from Dan's I char-grill rare to medium rare, slice it on an angle, make a mushroom sauce and I have a London Broil. Very tasty.
Top

Sailorman wrote:Of note, the fillet (that's what they call it) beef that Dan's Meats is selling in Snooky is actually sphincter muscle (actually a good piece of beef) and I used to use it for taco meat in a upmarket Mexican restaurant years ago.

Yummm. You can really taste the sphincter in every bite. There is nothing like a mouthful of anus !!
Top

Go talk to Edi at Khmerita. As long as you aren't looking to go into competition with him, I can't see any reason he wouldn't clue you up mate.
Top

Soi Dog wrote:Yummm. You can really taste the sphincter in every bite. There is nothing like a mouthful of anus !!

Ass I said (sorry for the pun), the sphincter muscle is a decent piece of meat. It just opens and closed the anus. Take a look at the muscle in your arm and multiply it by 10 and that's what it looks like. I buy it all the time from Dan's in Snooky. The only thing I don't like is them saying its a fillet, but what are you going to call it and still have people buy it? Maybe a forum contest to "name that muscle/piece of meat?"
Top

Sphincter ham - No butts about it.

I was just reading this: 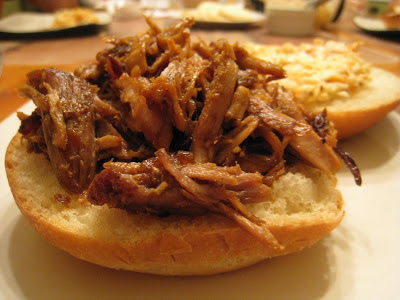 There are some days that I really want to cook, but I'm not sure how much time I will have to do it. Today was a day like that, I wasn't sure if I would get away from work at regular hours, or if I would be on the clock until around midnight. Because of this, I decided to make a meal that was going to taste just as good tomorrow as it did tonight, in case I wasn't around to eat it (which, for the record, I was). I had picked up some kaiser buns at the store (sorry, not homemade this time!) and wanted to use them up while they were still fresh.

While living in Ontario, one of the things I loved about the LCBO (other than that it was a place to buy wine!) was the wonderful little free books with recipe ideas and wine pairings in them. The NLC does something similar that I also eagerly keep my eye out for... anyway, the Summer 2010 edition had a really interesting recipe for Vanilla Rum Pulled Pork. They also post their recipes (including this one!) on their website.

The only real issue that I had with this recipe, was that I was working, had set my oven to a cook time, and wasn't around to keep an eye on it. While the pork was so tender and moist, I didn't end up with much pan sauce, and the sugar on the bottom of the baking dish kind of burned to the bottom. Oh well, no big difference to the recipe, I just used some stock in place of the pan juices.

The sauce is very sweet, but with that said very very good. I had worried that the flavors of molasses and vanilla would give the sandwich flavors that I wasn't crazy about, but it was actually very nice tasting, and I found that the flavors married well, without one particular flavor overpowering everything else. While it might have turned out a bit better had I been home to watch it, it sure was nice to come home to my supper pretty much done, with only a little bit of planning!

Directions
Pat roast dry with paper towel. Combine sugar, mustard and pepper in a shallow dish; add roast and press sugar mixture all over to coat evenly. Cover and refrigerate for at least 8 hours or for up to 24 hours.

To make sauce, melt butter over medium heat in a saucepan. Add onion and sautÃ© for about 5 minutes or until soft and golden. Pour in rum, stirring. Stir in vanilla bean, brown sugar, vinegar, molasses, nutmeg, pepper and salt. Bring to a boil, stirring often to dissolve sugar. Reduce heat and boil gently, stirring occasionally, for about 15 minutes or until slightly reduced and syrupy. Remove from heat and discard vanilla pods.

Transfer roast and accumulated liquid to a roasting pan; season all over with salt and pepper. Cover entire pan with foil, sealing tightly around pan but not touching roast. Place in oven and roast for 2 hours.

Liberally baste roast with about one third of the Vanilla Rum Barbecue Sauce. Cover and roast for 1 hour or until fork-tender.

Uncover and grill or roast for 30 minutes, basting with pan juices once, or until browned and very tender and a meat thermometer reads at least 170Â°F (75Â°C). Tent with foil and let stand for 15 minutes.

Meanwhile, pour pan juices into a container. Spoon off as much fat from the surface as possible and pour into a saucepan. Bring to a boil over high heat, stirring often. Reduce heat and boil gently for about 10 minutes or until slightly thickened; stir in remaining Vanilla Rum Barbecue Sauce.

Using your 2 forks, shred pork into small pieces, discarding excess fat as you shred. To serve later, refrigerate pork and sauce separately in airtight containers for up to 2 days.

To serve, reheat sauce over medium heat in a saucepan or in a foil pan until bubbling. Add pork and heat, stirring often, until piping hot. Season to taste with salt and pepper.

Serve on lightly toasted kaiser bun. Coleslaw made a wonderful condiment for this sandwich.

** My roast was a lot smaller, so I halved this recipe and it can out wonderfully **
Top

OD, could we please have this recipe in the articles section so that we can find it later?
Using Tapatalk
Top
Post Reply Previous topicNext topic
13 posts

Users browsing this forum: No registered users and 375 guests