Bad news for this cat. 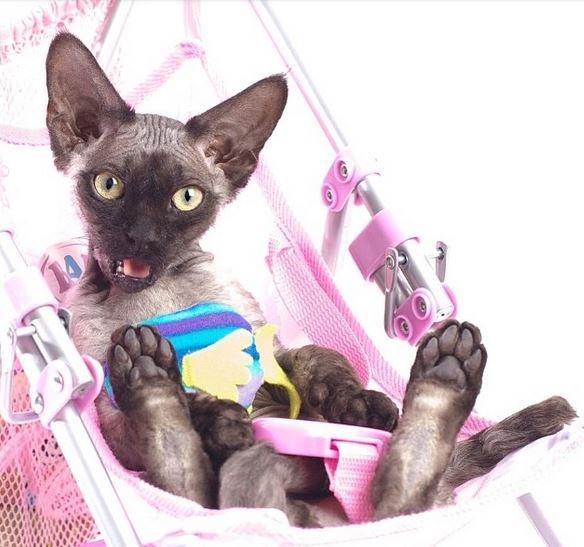 A quick search for "Stitch" can bring up a number of different results, from the Disney movie character to the various online businesses.

The most popular Stitch on the Internet may soon be a cat, who is already finding fans on Instagram. He is a Devon rex from the U.K., and similar to Grumpy Cat, Stitch is gaining a fanbase because of his unique look.

An Instagram account called "thousandfacesofstitch," which launched in February, initially posted a picture of the feline surrounded by balloons, celebrating his 2-month birthday. That picture has been liked over 550 times. The account, which just features photos of Stitch behind a white backdrop, now has over 13,000 followers. Since April, pictures typically receive between 1,000 to 2,000 likes.

Some of the pictures show Stitch playing with a toy or digging through a box. But the most popular snapshots are just of the cat alone, outstretched. His body is slim and lanky, and he has oversized ears and wrinkly skin. Stitch is not the prettiest cat, but his owner clearly does not care.

"He is strange looking," Darya Leon, the cat's owner, freely admitted in a comment on the last photo posted of the cat. "And I guess for some people it's beautifully strange and for some ugly strange. But as long as he makes everybody laugh I don't care."

Leon told the Daily Mail that Stitch did in fact get his name from the Disney character because he looks like an alien. And perhaps like his namesake, he will be on the silver screen soon. After all, that single 2012 post of Grumpy Cat â€” real name Tardar Sauce â€” led to a movie and a book deal along with merchandising and appearances.

...click link to continue reading... (which includes a video)

Users browsing this forum: No registered users and 230 guests