If you have something so weird, strange or off-topic to post and think it doesn't belong in any other forum; you're probably right. Please put all your gormless, half-baked, inane, glaikit ideas in here. This might also be a place where we throw threads that appear elsewhere that don't belong ANYWHERE end up, instead of having to flush them. FORUM RULES STILL APPLY.
Post Reply Previous topicNext topic
50 posts

You don't get antipsychotic medicine for being bullied. I think he loves the attention. It's the most attention he's been getting in at least 5 years according to his Facebook. 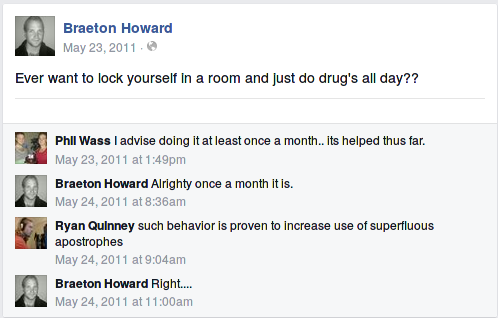 he was clinically insane??
and now has a boxing/mma/streetfighting bare knuckle gym?
i also read he wants to teach english? to kids?

Jamie_Lambo wrote:Out of the few videos id seen i didnt really want to (tried not to) judge him too much, but after seeing this video, i think its really disrespectful and insulting to a lot of people i really dont know what the fuck hes doing in cambodia at all, absolute douche!

LOL, the guy with shaved eyebrows and a superman hat is commenting on Cambodian customs with fingernails and pyjamas.(He forgot to mention the hats BTW.) And everybody knows that Khmers spend all their time lolling about doing their nails and eating chicken in their pyjamas.
Is he captain America ?
Top

There are a series of profanity-laced, fucked up videos attacking peoples and cultures.

NJH is the guy booming, calling locals fags and cunts, and disparaging their wives's vaginas.

I hope some long-nailed, Lexus-driving "douchebag" doesn't stick a screwdriver into his back while his pajama-wearing wife watches.

Howard: Make a note to self: You live in Cambodia. People are watching. You have gone too far, bro. Too far.

I thought he was a harmless idiot. After watching some of his stupid youtube videos i realize he is just a douche re-hashing general knowledge and rumors . I really hope this is a piss take. I have a feeling it's not.
Top

Sooner or later, this will end up big on facebook, and we will all get flak because of it.
Jesus loves you...Mexico is great, right?

I don't know why I worry, and I guess I don't, but he might get harmed.

That's what I want to say.

Again, me, still too pedantic.
It's all foma ~ kv
Top

i dont think hes mentally stable, i think sooner or later cambodia will get the better of him and he will flip out and either end up dead or in prison

"This is fucking No Joke, Howard, cunts. Today, I want to talk to you about being beaten on by an angry mob and the Cambodian health service. I thought everything was fucking sweet until this group of dudes with long finger nails, have I told you how much I fucking hate long fingernails?, came up to me in the street and proceeded to whale on me with baseball bats. I fucking hate Cambodian baseball bats motherfuckers, they're all made out of wood rather than fucking metal, what the fuck is with that? Don't they fucking understand baseball in this country? They broke my ribs, shattered my cheek bone and smashed a knee cap but I made sure they knew they were fucking with the wrong guy, several of them will have teeth marks in their shoes as I bit them when they were kicking my teeth in. The good news is that dentists in this country fucking rock and I can get some wooden teeth for $5, so No Joke will be smiling at his fucking tormentors soon - the bad news is that the health service sucks motherfuckers. No Joke's spleen was removed and now he needs to raise $30,000 for his medical bills. Maybe the guy with the small cock who I helped can do me a fucking solid and pay because otherwise based on my fucking YouTube revenue - I will be here for another 314 years. Fucking cunts. You're all fucking cunts. Don't you know that No Joke is a man? That I don't give a fuck that I'm permanently fucking disabled? You're all still jealous of my fucking hats. Cunts."
"If you want a vision of the future, imagine a boot stamping on a human face - forever." - George Orwell
Top Users browsing this forum: No registered users and 95 guests